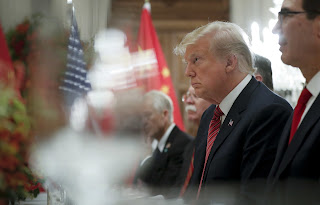 BUENOS AIRES, Argentina (AP) — The Latest on President Donald Trump at the Group of 20 summit (all times local):

Speaking to reporters aboard Air Force One, Trump says lawmakers have asked him for an extension after Bush’s death late Friday. The 41st president is set to be honored with a state funeral, including plans to lie in state in the Capitol this week, a ceremony at the National Cathedral and a national day of mourning Wednesday.

Trump says: “I would absolutely consider it and probably get it.”

Trump had been gearing up for a showdown at the end of the week as he’s sought billions for the construction of a wall along the U.S.-Mexico border.

President Donald Trump says his next meeting with North Korea’s Kim Jong Un is likely to happen in January or February.

The president tells reporters that there are three sites under consideration, but he’s not identifying them.

Trump, speaking aboard Air Force One on his return from Argentina, tells reporters that he and Kim are “getting along very well” and have a “good relationship.”

He adds that at some point he’d like to invite Kim to the United States.

Negotiations between the U.S. and North Korea on ending its nuclear program have appeared to stall in the months since Trump and Kim held a historic summit in Singapore in June.

The two leaders made a vague commitment on “denuclearization” of the Korean Peninsula during the summit, but glossed over how to make it happen.12:30 a.m.

President Donald Trump says he will shortly be providing formal notice to Congress that he will terminate the North American Free Trade Agreement, giving lawmakers six months to approve the replacement he recently signed.

Speaking to reporters aboard Air Force One while returning to Washington from Argentina, Trump says: “I will be formally terminating NAFTA shortly.”

Seeking to gain leverage with skeptical lawmakers to approve the revised trade pact, Trump says Congress “will have a choice” as it considers the agreement he signed with the leaders of Mexico and Canada on Friday during the Group of 20 summit.

He says they can choose between the United States-Mexico-Canada Agreement or “pre-NAFTA, which works very well.”

Trump has made renegotiating NAFTA a centerpiece of his presidency.
AP Press