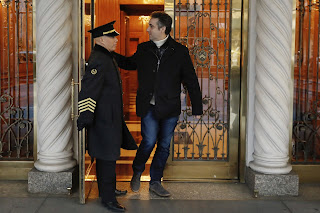 Michael Cohen, former lawyer to President Donald Trump, leaves his apartment building on New York's Park Avenue, Friday, Dec. 7, 2018. In the latest filings Friday, prosecutors will weigh in on whether Cohen deserves prison time and, if so, how much. (AP Photo/Richard Drew)

WASHINGTON (AP) — Robert Mueller is set to reveal more details about his Russia investigation on Friday as he faces court deadlines in the cases of two men who worked closely with President Donald Trump.

The special counsel and federal prosecutors in New York will have to file separate memos in court detailing the cooperation of longtime Trump legal fixer Michael Cohen, who has admitted lying to Congress and orchestrating hush-money payments to protect the president. And Mueller’s team will also be disclosing what they say former Trump campaign chairman Paul Manafort lied about when his plea deal fell apart last month.

Cohen and Manafort are among five former Trump associates whom prosecutors have accused of lying either to federal investigators or to Congress.

The court filings will close out a week in which Mueller’s team for the first time provided some details of the help they’ve received from former Trump national security adviser Michael Flynn. Prosecutors, who said Flynn’s assistance was “substantial” and merited no prison time, disclosed that he had cooperated not only with the Russia investigation but also with at least one other undisclosed criminal probe.

The new details about Mueller’s investigation are set to become public as Trump continues to lash out at the Russia investigation and those who help prosecutors. Trump singled out Cohen, accusing him of lying to get a reduced prison sentence. The president also praised another associate, Roger Stone, for saying he wouldn’t testify against him, and Trump said a pardon for Manafort isn’t off the table.

In the latest filings Friday, prosecutors will weigh in on whether Cohen deserves prison time and, if so, how much. In doing so, they’ll have to provide a federal judge with at least some description of the assistance he’s provided to their investigations — the Russia probe and a separate investigation led by the U.S. attorney’s office in Manhattan.

In August, Cohen pleaded guilty to eight criminal counts, including tax evasion and campaign finance violations. He said Trump had directed him before the 2016 election to arrange payments to buy the silence of porn actress Stormy Daniels and former Playboy model Karen McDougal, both of whom alleged they had affairs with Trump.And then last week, Cohen made a surprise guilty plea to lying to Congress, a move that refocused attention on Trump’s ties to Russia during the 2016 campaign. Cohen admitted he lied about the details of a proposed Trump Tower in Moscow, saying that talks about the project went on until June 2016 — longer than he previously said. Cohen also said he discussed the project with Trump during the presidential campaign, undercutting the then-Republican presidential candidate’s statements that he didn’t have any deals in Russia.

Trump has downplayed the project and stressed that he never put any money into the deal and ultimately decided not to do it.

In Manafort’s case, prosecutors are expected to lay out what torpedoed the cooperation agreement he made when he pleaded guilty in September to two felony charges of conspiracy against the United States and conspiracy to obstruct justice. In late November, prosecutors revealed that Manafort had repeatedly lied to them but did not say about what. The allegations exposed him to the possibility of additional criminal charges and a lengthier prison sentence.

Manafort’s attorneys have denied that he made false statements, and a judge is expected to hear from them before deciding whether he actually lied. Manafort, who was convicted in August in federal court in Virginia of eight financial crimes, also awaits sentencing in that case.