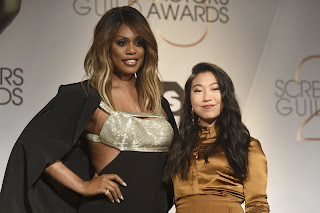 Laverne Cox, left, and Awkwafina pose following the nominations announcement for the 25th annual Screen Actors Guild Awards at the Pacific Design Center on Wednesday, Dec. 12, 2018, in West Hollywood, Calif. The show will be held on Sunday, Jan. 27, 2019, in Los Angeles. (Photo by Chris Pizzello/Invision/AP

In nominations announced in West Hollywood, Calif., the actors guild — one of the most predictive bellwethers of the Oscars — threw cold water on the awards campaigns of numerous contenders while elevating others. But “A Star Is Born” fared the best of all, landing nominations for Cooper (best male actor), Lady Gaga (best female actor) and Sam Elliott (best supporting male actor).

The other nominees for the group’s top award, best ensemble, were: “Black Panther,” ″Bohemian Rhapsody,” ″BlacKkKlansman” and “Crazy Rich Asians.”

That category is the most closely watched because only once in the last two decades has the eventual Oscars best picture winner not been nominated for best ensemble at the SAG Awards. The one aberration, though, was last year, when Guillermo del Toro’s “The Shape of Water” overcame the SAG omission on its way to winning best picture.

But “Roma” was shut out entirely, as was Damien Chazelle’s Neil Armstrong drama “First Man” and Barry Jenkins’ Harlem love story “If Beale Street Could Talk.” Most expected Regina King of “Beale Street” to be among the supporting female actor nominees.

Instead, Wednesday’s nominations gave an unlikely boost to “Bohemian Rhapsody,” the Freddie Mercury biopic that has been a hit with audiences but was slammed by critics. Despite being widely viewed as a riveting one-man show by Rami Malek, the film ended up nominated for its ensemble cast. Malek was also nominated for best actor.

Yorgos Lanthimos’ period romp “The Favourite” failed to crack best ensemble, but its three leads — Olivia Colman, Rachel Weisz and Emma Stone — were all nominated, as expected. Stone added a second nod for her performance in the Netflix miniseries “Maniac.”

Emily Blunt also scored two nominations herself: one for her lead performance in “Mary Poppins Returns” and one for her supporting role in “A Quiet Place.” The other best female performance nominees alongside Blunt, Lady Gaga and Colman were Glenn Close (“The Wife”) and Melissa McCarthy (“Can You Ever Forgive Me?”)

Blunt’s nomination for “A Quiet Place” was among the nominations’ many surprises, as was Margot Robbie’s supporting turn as Queen Elizabeth in “Mary Queen of Scots.”

Timothee Chalamet (“Call Me By Your Name”) scored his second straight SAG nomination for his supporting performance in the addiction drama “Beautiful Boy.” Rounding out the category alongside Ali, Driver and Elliott was Richard E. Grant for “Can You Ever Forgive Me?”

Usually, about 15 of the SAG’s 20 individual acting nominees line up exactly with the eventual Oscar field.

In television categories, “The Marvelous Mrs. Maisel” and “Ozark” led with four nominations each. “Barry,” ″GLOW,” ″The Handmaid’s Tale” and “The Kominsky Method” trailed close behind with three nominations each.

Up for best ensemble in comedy are “Atlanta,” ″Barry,” ″GLOW,” ″The Kominsky Method” and “The Marvelous Mrs Maisel.” The drama series ensemble nominees went to: “The Americans,” ″Better Call Saul,” ″The Haidmaid’s Tale,” ″Ozark” and “This Is Us.”

Though Netflix was nearly shut out on the film side (its lone nomination was for the stunt ensemble of “The Ballad of Buster Scruggs”), it dominated the television categories with 15 total nods.

The SAG Awards will be held Jan. 27 and broadcast live by TNT and TBS. This year’s show will honor Alan Alda with the Screen Actors Guild Life Achievement Award.