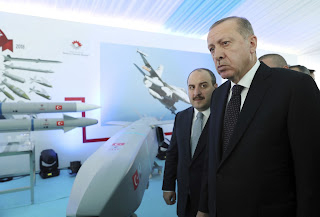 ANKARA, TURKEY (AP) — The order to kill Saudi journalist Jamal Khashoggi came from the highest level of the Saudi government, Turkish President Recep Tayyip Erdogan said Friday, adding that the international community had the responsibility to “reveal the puppet masters” behind the slaying.

In an op-ed in The Washington Post, Erdogan said he did not believe that Saudi King Salman had ordered the killing of Khashoggi at the Saudi Consulate on Oct. 2. He said Turkey’s close ties to Saudi Arabia did not mean that Turkey could turn a blind eye to the killing of the journalist.

“We know that the order to kill Khashoggi came from the highest levels of the Saudi government,” Erdogan said.

Erdogan wrote: “As responsible members of the international community, we must reveal the identities of the puppet masters behind Khashoggi’s killing and discover those in whom Saudi officials —still trying to cover up the murder — have placed their trust.”

Istanbul’s chief prosecutor announced Wednesday that Khashoggi, who lived in exile in the United States, was strangled immediately after he entered the consulate as part of a premeditated killing and that his body was dismembered before being removed.

Turkey is seeking the extradition of 18 suspects who were detained in Saudi Arabia so they can be put on trial in Turkey. They include 15 members of an alleged Saudi “hit squad” that Turkey says was sent to Istanbul to kill The Washington Post columnist who had written critically of Saudi Arabia’s Crown Prince Mohammed bin Salman.

Some of those implicated in the killing are members of the crown prince’s entourage.

In the opinion piece, Erdogan did not mention the prince. But few in Turkey and elsewhere believe that the crime could have been carried out without the knowledge of the kingdom’s powerful heir apparent.

Meanwhile, a Turkish official said he believes Khashoggi’s body was dissolved in acid or other chemicals after it was mutilated.

Yasin Aktay, a ruling party adviser to Erdogan, told The Associated Press on Friday that “there can be no other formula” to explain why Khashoggi’s remains have not been found a month after he was killed.

Aktay, who was friend of Khashoggi’s, said he believes that the body was cut into pieces so that it could be dissolved in chemicals. He said: “all the findings point to his body parts being melted.” But the official did not offer any proof for his comments.

Khashoggi had entered the Saudi Consulate in Istanbul to collect a document he needed to marry his Turkish fiancee.

In Bulgaria on Friday, Israeli Prime Minister Benjamin Netanyahu called Khashoggi’s slaying a horrendous act that “should be duly dealt with” in a way that doesn’t undermine Saudi Arabia’s stability.

Netanyahu said at a news conference that Iran is a bigger threat than Saudi Arabia and those who want to punish the Middle East kingdom need to bear that in mind.

“A way must be found to achieve both goals, because I think that the larger problem is Iran,” said the Israeli leader, who attended a meeting of the prime ministers of Bulgaria, Greece and Romania and the president of Serbia at a Black Sea resort.
Associated Press Jamal Kashoggi News Desk Saudi Arabia Turkey