Trump Vs. Obama In The Final Weekend Of The Midterms 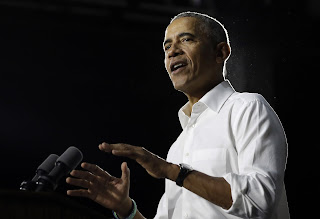 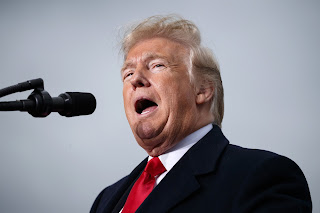 
WASHINGTON (AP) — Feuding from a distance, President Donald Trump and former President Barack Obama exchanged tough words Friday as they sought to rally their parties’ base voters in the final days before the midterm elections.

Obama urged Democrats in Miami to turn against “a politics based on division” and expressed hope that “we will cut through the lies, block out the noise and remember who we are called to be.” Trump said in West Virginia he watched Obama’s speech aboard Air Force One, reminding some of his most loyal supporters of what he called Obama’s broken promises on health care, the freedom of the press and global trade.

“Lie after lie, broken promise after broken promise, that’s what he did,” Trump said during an outdoor rally in Huntington, West Virginia.

The competing campaign rallies, including Friday evening events in Georgia and Indiana, placed Trump in a virtual split-screen moment with Obama and set the stage for weekend campaign events for both party heavyweights.

Trump covets the Senate seats held by Democrats Joe Donnelly of Indiana and Joe Manchin of West Virginia, two states that the president won handily in 2016. Democrats, meanwhile, could make history by electing black governors in Florida and Georgia, and are turning to the nation’s first black president to help make their case.

During the weekend, Trump will head to Montana and Florida on Saturday and Georgia and Tennessee on Sunday. Obama will return to the trail on Sunday, headlining rallies for Donnelly in Gary, Indiana, and in his hometown of Chicago for J.B. Pritzker, who is running for Illinois governor.

A look at campaign activities on Friday:

In Miami, Obama said democracy can’t work when words stop having meaning, encouraging a crowd of about 3,000 to vote for Democratic gubernatorial candidate Andrew Gillum and Sen. Bill Nelson.

Obama said voters shouldn’t be bamboozled by misinformation while Republicans allow polluters to poison the environment, give tax cuts to billionaires and take health care away from millions.

During the former president’s speech, a protester shouted that Obama should “denounce ANTIFA” — the protesters who square off against neo-Nazis. Obama responded by citing anger among Trump supporters despite their candidate’s win and asked, “Why are they so mad?”

That protester and two others were escorted from the venue.

Trump quickly fired back at his White House predecessor, saying the former president didn’t keep his promises to voters.

Trump said that Obama’s assertion that “if you like your doctor, you can keep your doctor” under the Affordable Care Act proved false. Some Americans were forced to change providers or health plans under the law.

Trump also said “nobody was worse to the press than Obama,” after Obama spoke in defense of the First Amendment. “He’s talking about how I should be nice to the fake news,” Trump said. “No, thank you!”

Trump received the type of jobs report that any president would envy heading into the final days before the midterm elections. But will he use it to his advantage?

The October economic data released Friday packed a wallop, finding that U.S. employers added 250,000 jobs during the past month and unemployment remained at a five-decade low of 3.7 percent. More people entered the labor force and wages made their biggest gains since 2009.

Yet it landed at the end of a week in which the president has made immigration and border security the paramount issue for Republicans in the midterms, warning without offering evidence that a caravan of immigrants is preparing an “invasion” of the U.S. southern border.

Trump called the economic numbers “incredible” on Twitter, but it raised the question of whether the president will pivot back to the economy — an approach favored by embattled House Republicans — or keep up his drumbeat on immigration before the election.

Trump teased Knight’s appearance in a tweet, saying: “Don’t tell anyone (big secret), but I will be bringing Coach Bobby Knight to Indiana. He’s been a supporter right from the beginning of the Greatest Political Movement in American History!”

Trump, Knight and Vice President Mike Pence, a former Indiana governor, will be rallying supporters behind Republican Mike Braun, who is running against Donnelly in a closely watched Senate contest.

In West Virginia, Trump was helping Republican state Attorney General Patrick Morrisey, who is in a tight contest against Manchin.

A group of high-powered Latinas are campaigning in Florida this weekend in two largely Latino neighborhoods to drive turnout in the midterm elections.

Also attending the Kissimmee rally will be the wife of Democratic gubernatorial candidate Andrew Gillum and two U.S. representatives of Puerto Rican background — Darren Soto of Florida and Nydia Velazquez of New York. Kissimmee is home to many transplants from Puerto Rico.