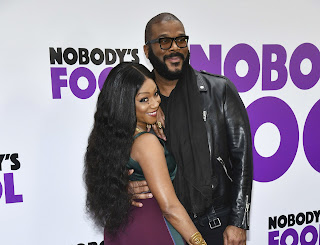 In this Oct. 28, 2018 file photo, Tiffany Haddish and Tyler Perry attend the world premiere of "Nobody's Fool" in New York. Haddish has a goal to make 50 movies by her 50th birthday. She says she also wants to keep expectations reasonable adding that ‘they’re not all gonna be great.’ She insists her latest movie, ‘Nobody’s Fool,’ written, directed and produced by Perry is one of the good ones. (Photo by Charles Sykes/Invision/AP, File)

NEW YORK (AP) — By the time Tiffany Haddish turns 50, she’s hoping to have 50 movies to her credit. She’s got 12 years and a few dozen films to achieve it.

“That’s the goal,” she said recently and quickly followed it up with, “They’re not all gonna be great.”

She insists her latest movie, “Nobody’s Fool,” out Friday and written, directed and produced by Tyler Perry, is one of the good ones.

In the movie, Haddish and Tika Sumpter play sisters. Sumpter is the straight-laced one who makes all the right choices. Haddish is more a wild child. The movie begins with Haddish getting out of jail and they discover Sumpter’s boyfriend is catfishing her.


It’s Perry’s first R-rated comedy and he says he wrote Haddish’s part with her in mind.

“I felt like I was writing for a 30-year-old Madea,” he said, referring to his wise-cracking character that has turned into a franchise. Madea was introduced in 1999 in a play and then went on to appear films, TV and a book.

“You’ve got Haddish and Whoopi Goldberg (who plays Haddish and Sumpter’s mom in the movie.) You can’t try to PG that down. You’re making an adult movie, so I went for it.”

Haddish says she and Perry had fun making up additional lines together on the spot.

“I’d be behind the camera like, ‘Say this, say that.’ She would grab it and then she’d say it and she’d add five things on top of it because her brain’s (working) all the time,” he said snapping his fingers.