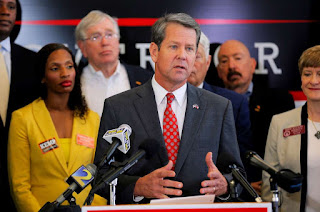 ATLANTA, GEORGIA (USA TODAY)--Two days before Election Day, the office for Georgia Secretary of State Brian Kemp, who is in a closely contested race for governor, announced Sunday it was opening an investigation into the state Democratic Party for a "failed attempt to hack the state's voter registration system," a move Democrats slammed as a political stunt.

"After a failed attempt to hack the state's voter registration system, the Secretary of State's office opened an investigation into the Democratic Party of Georgia on the evening of Saturday, November 3, 2018," Kemp's office said in a statement. "Federal partners, including the Department of Homeland Security and Federal Bureau of Investigation, were immediately alerted."

Further details about the nature of the alleged hack attempt or its connection to the Democratic Party were not provided.

Georgia Secretary of State spokeswoman Candice Broce declined to comment on the probe, but confirmed that the state Democratic Party was under investigation for "possible cyber crimes."

Rebecca DeHart, the executive director of the Georgia Democratic Party said Kemp's "so-called investigation" was "yet another abuse of power by an unethical Secretary of State."

"To be very clear, Brian Kemp's scurrilous claims are 100 percent false," DeHart said in a statement shared on social media. "This political stunt form Kemp just days before the election is yet another example of why he cannot be trusted."

Kemp is in a close race against Stacey Abrams, the former minority leader in the Georgia House of Representatives. The RealClearPolitics average of polls in the race shows Kemp ahead by about one percentage point, well within the margin of error.

CNN's Jake Tapper informed Abrams of Kemp's cybercrime allegation during her appearance on "State of the Union" Sunday.

"I've heard nothing about it and my reaction would be that this a desperate attempt on the part of my opponent to distract people from the fact that two different federal judges found him derelict in his duties," Abrams said. "He is desperate to turn the conversation away from his failures, from his refusal to honor his commitments and from the fact that he is part of a nationwide system of voter suppression that will not work in this election."

On Friday, U.S. District Court Judge Eleanor Ross granted an emergency injunction that will allow 3,141 people to vote in Tuesday's election. Those people had been taken off the voter rolls because of an "exact match" law, which allows zero discrepancies or errors on a voter's registration.

In her ruling, Ross said she had "grave concerns" about "the differential treatment inflicted on a group of individuals who are predominantly minorities."

Democrats have called on Kemp to step down as secretary of state, accusing him of a conflict of interest in overseeing the office that supervises the state's election while running as a candidate himself.

The allegations of voter suppression and the possibility that Abrams could become the first African-American woman to serve as a governor in the United States has drawn national attention to the race.

President Donald Trump and Vice President Mike Pence have traveled to the state to campaign for Kemp, while former President Barack Obama, along with celebrities Oprah Winfrey and Will Ferrell, are among those who have campaigned for Abrams.