Dead In Cars And Homes: Northern California Fire Toll At 42 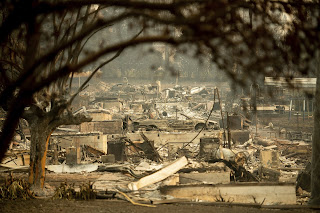 BY GILLIAN FLACCUS AND DON THOMPSON

PARADISE, CALIF. (AP) — The dead were found in burned-out cars, in the smoldering ruins of their homes, or next to their vehicles, apparently overcome by smoke and flames before they could jump in behind the wheel and escape. In some cases, there were only charred fragments of bone, so small that coroner’s investigators used a wire basket to sift and sort them.

At least 42 people were confirmed dead in the wildfire that turned the Northern California town of Paradise and outlying areas into hell on earth, making it the deadliest blaze in state history. The search for bodies continued Monday. Authorities said they were bringing in cadaver dogs, two portable morgue units from the military and an additional 160 search and rescue personnel to help find human remains.

“This is an unprecedented event,” Butte County Sheriff Kory Honea told an evening news conference. “If you’ve been up there, you also know the magnitude of the scene we’re dealing with. I want to recover as many remains as we possibly can, as soon as we can. Because I know the toll it takes on loved ones.”

Officials said they did not know how many people were missing four days after the fire swept over the town of 27,000 and practically wiped it off the map with flames so fierce that authorities brought in a mobile DNA lab and forensic anthropologists to help identify the dead.

Meanwhile, a landowner near where the blaze began, Betsy Ann Cowley, said she got an email from Pacific Gas & Electric Co. the day before the fire last week telling her that crews needed to come onto her property because the utility’s power lines were causing sparks. PG&E had no comment on the email, and state officials said the cause of the inferno was under investigation.

As the search for victims dragged on, friends and relatives of the missing called hospitals, police, shelters and the coroner’s office in hopes of learning what became of their loved ones. Paradise was a popular retirement community, and about a quarter of the population was over 65.

Tad Teays awaited word on his 90-year-old dementia-stricken mother. Darlina Duarte was desperate for information about her half brother, a diabetic who was largely housebound because he had lost his legs. And Barbara Hall tried in vain to find out whether her aunt and the woman’s husband, who are in their 80s and 90s, made it out alive from their retirement community.

“Did they make it in their car? Did they get away? Did their car go over the edge of a mountain somewhere? I just don’t know,” said Hall, adding that the couple had only a landline and calls were not going through to it.

Megan James, of Newfoundland, Canada, searched via Twitter from the other side of the continent for information about her aunt and uncle, whose house in Paradise burned down and whose vehicles were still there. On Monday, she asked on Twitter for someone to take over the posts, saying she is “so emotionally and mentally exhausted.”