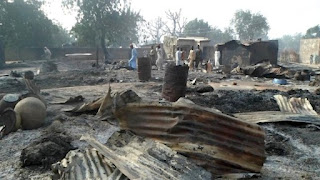 Garga disclosed that the insurgents attacked the communities and an Internally Displaced Persons (IDPs) camp in the outskirts of Maiduguri on Wednesday night.

He listed the affected communities to include Kofa, Mallumti, Ngomari and Gozari as well as Dalori 2 IDPs camp.

He said: “The attack occurred on Wednesday night at about 8:00 pm; Kofa, Mallumti, Ngomari and Gozari villages, which are close to Dalori IDPs camp, were affected.

“Many villagers fled to the Dalori IDPs camp for safety leading to the insurgents’ attack on the camp vicinity which claimed the lives of two displaced persons, making a total of eight deaths.

“The terrorists gained access to the area through a bush path behind the villages and came in four vehicles and motorcycles. They ransacked the market in front of the IDPs camp.

“Villagers who ran into the bush for safety have returned back to their homes while the Borno State Fire Service contained the inferno.

“About 490 households with estimated population of 2, 940 persons were displaced in the attack”.

Garga added that those who sustained injuries in the attack were treated at a clinic in the camp, while those with serious injuries were referred to hospitals in Maiduguri for treatment.

According to him, an assessment team was deployed to provide relief assistance to the affected persons.

The state deputy governor, Alhaji Usman Durkwa, who visited the scene of the attack, sympathized with victims and assured them of immediate interventions by the government to alleviate their sufferings.
Boko Haram Islamic Jihadists Islamic State Nigeria PM News