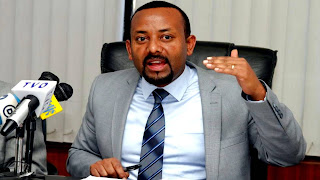 ADDIS ABABA, ETHIOPIA (AP) — Africa's leaders applauded Ethiopia's Prime Minister Abiy Ahmed for making substantial reforms in his country as they met to consider improvements to the continent-wide body at a summit that started Saturday.

"Ethiopia is undergoing a profound renewal. In the past seven months, far-reaching reforms were made in response to various challenges," said Abiy, 42.

"We have opened a new political space for dialogue, released thousands of prisoners, lifted bans placed upon political parties and media outlets and unblocked websites. We are now actively cracking down on corruption and reforming our judicial system in its entirety," said Abiy, winning enthusiastic applause from African leaders at the meeting.

He stressed that his government must be accountable for its actions. He also highlighted that his administration has achieved peace with neighboring Eritrea and has appointed a Cabinet in which 50 percent of the members are women.

Abiy spoke as African Union leaders, led by Rwanda's President Paul Kagame, convened an extraordinary summit at its headquarters in Addis Ababa to consider reforms to encourage peace, development and a united Africa.

Ethiopia's leader, who came to power in April, urged the African leaders to make significant changes.

"Reforming the African Union is relevant and timely, given recurring domestic strife, violence, emerging threats on the continent and increased competition in the international arena," said Abiy.

Copyright 2018 The Associated Press. All rights reserved. This material may not be published, broadcast, rewritten or redistributed.