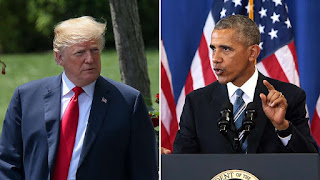 WASHINGTON (THE HILL)--President Trump's approval rating before the November elections has jumped to a higher level than former President Obama's ahead of the 2010 midterms, according to a new NBC/Wall Street Journal poll.

The poll found Trump's approval rating at its highest level for that poll yet, at 47 percent. Obama's approval rating was 45 percent around the same time in 2010, according to a similar NBC/Wall Street Journal poll taken in late October 2010.

Obama's approval rating was reaching a record low in October 2010, just before his party lost a significant number of seats in the House and Senate.

Trump is a historically unpopular president among the general U.S. population, but consistently retains extremely high levels of Republican support. Recent polls have put him at around a 90 percent approval rating among Republicans.

Many see the midterm elections as a referendum on the current president.

Republicans and Democrats are facing a particularly tough election year, with vulnerable Democratic senators seeking to retain their seats in states Trump won by double digits in 2016 as Republicans deal with widespread Trump disapproval among suburban women and other groups.

The new NBC/WSJ poll found voters more energized than they have been for years, with 72 percent of Democrats telling pollsters they are very interested in the upcoming election as 68 percent of Republicans said the same.

"Midterms are about mobilization, and we are headed into the stretch run with unprecedented enthusiasm among both parties," Democratic pollster Fred Yang told NBC.

Overall, the poll found Democrats with a 9-point lead over Republicans in the battle for congressional control. Fifty percent of likely voters said they want Congress to flip to the Democrats while 41 percent said they want Republicans to retain majorities.
Barack Obama Capitol Hill Donald Trump News Desk Politics