The Latest: GOP Senate Could Act On 2020 High-Court Nominee 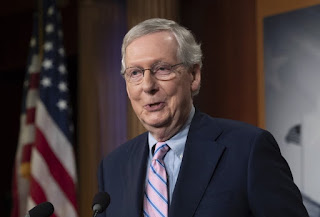 Senate Majority Leader Mitch McConnell is signaling that a Republican-controlled Senate would act on President Donald Trump’s nominee to the Supreme Court in 2020, a presidential election year, should a vacancy arise.

McConnell had blocked a vote on Democratic President Barack Obama’s choice of Merrick Garland to the high court in 2016, citing tradition of not filling vacancies in a presidential election year.

But when asked on “Fox News Sunday” if that would apply in 2020, McConnell said: “We’ll see if there is a vacancy.”

He says in 1880 a vacancy was not filled when the Senate was controlled by the party opposing the president.

Sen. Susan Collins says she believes Christine Blasey Ford, who accused now Supreme Court Justice Brett Kavanaugh of sexually assaulting her when they were teenagers, was attacked, but not by Kavanaugh.

The Maine Republican, who cast a pivotal vote to confirm Kavanaugh, tells CNN’s “State of the Union” on Sunday: “I do not believe that Brett Kavanaugh was her assailant.”

Collins says while she believes Ford was assaulted, “I don’t know by whom, and I’m not certain when.”

Ford testified before Collins and others on the Senate Judiciary Committee that she was “100 percent” certain that Kavanaugh was her attacker.

Collins says she found Ford’s testimony “to be heart-wrenching, painful, compelling, and I believe that she believes what she testified to.”

Brett Kavanaugh has been sworn in as the 114th justice of the Supreme Court after a wrenching debate over sexual misconduct and judicial temperament that shattered the Senate and captivated the nation.

Even as Kavanaugh took his oath of office Saturday evening in a quiet private ceremony, protesters chanted outside the court building across the street from the Capitol.

The climactic 50-48 roll call was the narrowest Senate confirmation in nearly a century and a half.

Kavanaugh’s confirmation provides a defining accomplishment for President Donald Trump and the Republican Party, which found a unifying force in the cause of giving the court a new conservative majority.