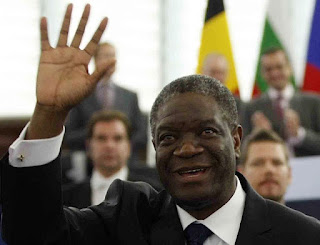 In this Nov. 26, 2014 file photo, Doctor Denis Mukwege, from the Democratic Republic of Congo, a gynecologist who specializes in treating victims of rape and extreme sexual violence, waves as he gets the Sakharov Prize at the European Parliament in Strasbourg eastern France. Mukwege and Nadia Murad have been named the winners of the Nobel Peace Prize on Friday, Oct. 5, 2018. (AP Photo/Christian Lutz,) 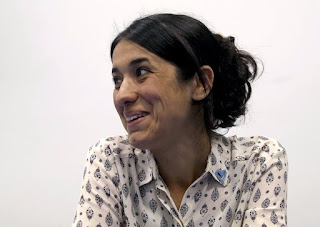 In this Monday, May 22, 2017 file photo, Human rights activist Nadia Murad speaks during an interview with The Associated Press at the International Center in Vienna, Austria. Denis Mukwege and Murad have been named winners of the Nobel Peace Prize, it was announced on Friday, Oct. 5, 2018. (AP Photo/Ronald Zak).


OSLO, NORWAY (AP) — The Nobel Peace Prize on Friday was awarded to a Congolese doctor and a Yazidi former captive of the Islamic State group for their work to highlight and eliminate the use of sexual violence as a weapon of war.

Denis Mukwege and Nadia Murad “have made a crucial contribution to focusing attention on, and combating, such war crimes,” the Norwegian Nobel Committee said in its announcement.

“Denis Mukwege is the helper who has devoted his life to defending these victims. Nadia Murad is the witness who tells of the abuses perpetrated against herself and other.”

Mukwege has treated thousands of women in Congo, many of whom were victims of gang rape. Armed men tried to kill him in 2012, forcing him to temporarily leave the country.

Murad is one of an estimated 3,000 Yazidi girls and women who were victims of rape and other abuses by the IS army. She managed to escape after three months and chose to speak about her experiences. At the age of 23, she was named the U.N.’s first Goodwill Ambassador for the Dignity of Survivors of Human Trafficking.

In other Nobel prizes this year, the medicine prize went Monday to James Allison of the University of Texas M.D. Anderson Cancer Center and Tasuku Honjo of Kyoto University, whose discoveries helped cancer doctors fight many advanced-stage tumors and save an “untold” numbers of lives.

Scientists from the United States, Canada and France shared the physics prize Tuesday for revolutionizing the use of lasers in research.

On Wednesday, three researchers who “harnessed the power of evolution” to produce enzymes and antibodies that have led to a new best-selling drug won the Nobel Prize in chemistry.

The winner of the Nobel Memorial Prize in Economic Sciences, honoring Alfred Nobel, the founder of the five Nobel Prizes, will be revealed on Monday.

No Nobel literature prize will be awarded this year due to a sex abuse scandal at the Swedish Academy, which choses the winner. The academy plans to announce both the 2018 and the 2019 winner next year — although the head of the Nobel Foundation has said the body must fix its tarnished reputation first.

The man at the center of the Swedish Academy scandal, Jean-Claude Arnault, a major cultural figure in Sweden, was sentenced Monday to two years in prison for rape.
Associated Press Congo Human Rights Nobel Prize Society