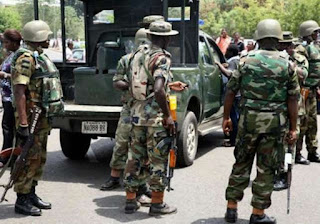 Image of the Nigerian soldiers assaulting a journalist via The Herald

PORT HARCOURT (THE HERALD, NIGERIA)--In spite of efforts to curb human rights abuses within Nigeria’s security forces, especially against Journalists in the country, the menace seems to be proving difficult to stamp out as some members of security forces prefer to remain immersed in the habit of brutalizing innocent members of the public.

The latest victim of assault is a journalist with the leadership newspaper Mr. Anayo Onukwugha who was severely assaulted by a soldier in the Nigerian Army.

The assault happened on Thursday at the entrance of the new main terminal of the Port Harcourt International Airport recently commissioned in Rivers State.

Mr. Onukwugha, had one to the airport at about 9.30am to cover the inauguration of the international wing of the airport by President Muhammadu, on Thursday when he was assaulted.

The soldier who did not wear a names tag hit Mr. Onukwugha several times with a stick as he ignored entreaties that his victim was a journalist assigned to cover the event of the day.

The Journalist who narrated his experience to newsmen at the scene immediately after h=it happened said he felt dehumanised by the action of the soldier,

“They (soldiers) were pushing back the crowd that came for the event and I identified myself to the soldier as a journalist. But that did not mean anything to him as he began to hit my legs with a stick.”

Asides being physically assaulted by the soldiers at the venue, Mr. Onukwugha alongside other journalists billed to cover the airport inauguration were denied access into the premises and were forced to leave eventually.

When approached for comments, one of the security agents in civilian clothing said the military unit was from Aso Rock and had been instructed not to allow journalists without Identification Tags into the venue.

Journalists from Daily Trust, The PUNCH, Daily Independent, New Telegraph and The Sun were among those turned back by the security agents, despite presenting a valid means of Identification.
News Desk Nigeria Port Harcourt Society