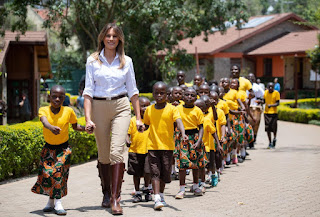 First lady Melania Trump walks and sings with children as she visits the Nest Childrens Home Orphanage in Nairobi, on October 5, 2018, which primarily cares for children whose parents have been incarcerated. President Donald Trump said her trip was "eye-opening." SAUL LOEB/AFP/GETTY IMAGES

WASHINGTON (NEWSWEEK)--First lady Melania Trump had an "eye-opening" experience on her recent trip to Africa, according to President Donald Trump.

The president, who in January reportedly called African nations “shithole countries,” said in an exclusive sit-down interview with Fox News host Laura Ingraham in the White House Monday night that they are “trying to help” with the extreme poverty in the continent following his wife’s first solo trip abroad earlier this month.

The Ingraham Angle host, after having the president address issues including the migrant caravan, his potential 2020 presidential opponents and the midterm elections, asked, “How’s Melania doing?”

The president did not elaborate and the interview ended there.

Melania Trump raised eyebrows when she chose to visit Ghana, Kenya and Egypt, following reports that her husband’s reported “shithole” remark about African nations, Haiti and El Salvador in an immigration meeting with lawmakers in the Oval Office.

During her trip, Melania Trump visited a hall in Ghana named after ex-President Barack Obama and a former slave holding facility.

"I will never forget [the] incredible experience and the stories I heard,” she said at the former slave trading fort. “The dungeons that I saw, it's really something that people should see and experience.” She added that “it's very emotional,” and in other legs of the trip spent time reading to children.

The president, while his wife was away, tweeted that she was “doing really well in Africa," and, "The people love her, and she loves them! It is a beautiful thing to see.”

Despite his wife appearing distant at times—particularly when his alleged affair with adult film star Stormy Daniels, real name Stephanie Clifford, came to light—the president has often described her as doing really well and fantastic.

In June, when she appeared with him in public for the first time after nearly a month’s absence that the administration said was due to a kidney procedure, Donald Trump said: “Melania, she’s doing great. She went through a little rough patch, but she’s doing great, and we’re very proud of her. She’s done a fantastic job as first lady.”

The White House did not immediately respond to a request for comment from Newsweek on how the president plans to help Africa.
Africa Donald Trump News Newsroom
Reactions: 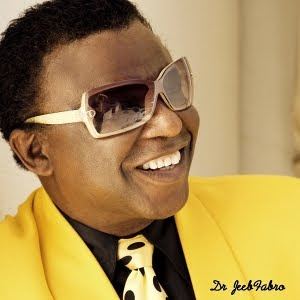 Born to ElderEmin Agbomi Ekoro and Mae Jane Ipam Agbomi Ekoro, practicing physician Elemi John E. Agbomi sits in his studio making beats with Reason and I had to catch up with him at the DEJEA Music Production while he was checking out series of his unpublished songs. Excerpt: You were trained in the medical field and some other areas in academia. How about some history regarding your background? My name is Elemi John Emin Agbomi, also known as Dr. Jeeb Fabro. I was born in Adadama, Cross River State, Nigeria. I received my bachelor's degrees - BA in Physics, and BS in Biology from the University of Arkansas at Little Rock; my master's degree, MS in Operations Management from the University of Arkansas, Fayetteville and my doctorate degree in Medicine, MD, from the University of Arkansas for Medical Sciences. I did my residency at Westside Family Practice and clinical practice at Akron General Medical Center. I have for over 10 years also been involved with teaching in co