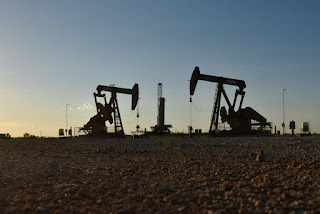 LONDON,(REUTERS) - Shipments of West African oil to Asia are set to hit a two-month high in October as Chinese refineries scramble for alternatives to Iranian crude before U.S. sanctions take effect on Nov. 4.

Loadings for Asia will rise to 2.52 million barrels per day (bpd) in October, equivalent to 75 percent of total output from Angola, Nigeria, Republic of Congo, Ghana and Equatorial Guinea, based on Reuters calculations, shipping brokers and Refinitiv Eikon data.

This compares to September's 2.27 million bpd, which was almost 70 percent of regional output.

China has been the main driver for Asian demand before the implementation of U.S. sanctions that analysts estimate will remove 500,000 bpd to 2 million bpd of Iranian oil from the market.

West African grades tend to produce a large proportion of high-value distillates, such as diesel or jet fuel, much like Iranian crude oil, making it an attractive replacement.

Other buyers across Asia and Europe have also said they would cut back on purchases of Iranian oil, unleashing a burst of demand for West African and other crudes rich in distillates, such as grades from Saudi Arabia or the North Sea.

The looming deadline on Iranian crude is not the only factor behind the surge in demand for October cargoes to China.

Independent Chinese refineries, known as teapots, eased up on imports earlier in the third quarter for maintenance. Now they are restocking before the end of the month, as their import quotas are based on purchases made from January to October.

"The resurgence of Chinese teapot buying could not have come at a more awkward time for the oil market," consultancy Energy Aspects wrote.

"China was widely expected to need to restock. But its renewed appetite for crude has been bolstered by panic buying from teapots," the consultancy said.

Elsewhere in Asia, India is offering some respite for the stretched West African market, buying about 451,000 bpd in October, down from September's 500,000 bpd, while Glencore will ship a rare suezmax cargo of West African crude to South Korea.

Nigerian Agbami, Qua Iboe and Bonny Light make up the bulk of the WAF exports to India. tmsnrt.rs/2MNuxkU