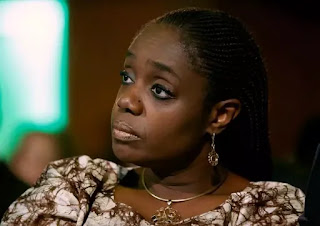 
ABUJA (REUTERS) - Nigerian President Muhammadu Buhari on Friday accepted the resignation of Finance Minister Kemi Adeosun, who said she stepped down over allegations of using a forged certificate to avoid participation in the country’s mandatory one-year national youth service scheme.

Adeosun, a top cabinet member and a former investment banker who promoted the government’s policy to boost growth following a recent recession, said in a statement that she believed she was exempt from the service scheme but felt bound to resign because of the administration’s “focus on integrity.”

Allegations that Adeosun had used a forged exemption certificate to avoid participation in the youth service scheme surfaced in recent months in the Nigerian media. Adeosun did not comment on the claims initially, prompting criticism from her opponents.

In her statement on Friday, Adeosun said her understanding was that she was exempted from the scheme because she had moved back to Nigeria from Britain, where she was born, after she had passed the required minimum age.

“I have, today, become privy to the findings of the investigation into the allegation made in an online medium that the Certificate of Exemption from National Youth Service Corp (NYSC) that I had presented was not genuine,” she said in her statement. “This has come as a shock to me and I believe that in line with this administration’s focus on integrity, I must do the honorable thing and resign.”

Adeosun was appointed by Buhari to manage the finances of Africa’s biggest economy in November 2015. Her flagship policy was a bid to improve tax collection and shore up the country’s finances by cracking down on mismanagement by government agencies.

Buhari took office in 2015 after an election campaign largely fought on his vow to fight corruption, but his detractors have accused him of failing to investigate allies accused of wrongdoing.

The presidency approved that the minister of state for budget and national planning, Zainab Ahmed, would oversee the Finance Ministry with immediate effect, it said on its official Twitter account.

The government’s handling of the economy is likely to be a campaign issue in February’s presidential election in which Buhari plans to seek a second term.