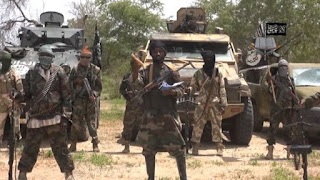 Boko Haram image via the BBC


MAIDUGURI, NIGERIA (AP) — Boko Haram extremists have overrun a key crossroads and military outpost in northern Nigeria, residents said Saturday. Gudumbali is a town to which just months ago the government encouraged displaced people to return.

The Borno state secretary of the self-defense hunters association, Bunu Bukar, said the extremists attacked Friday afternoon. There were no immediate reports of deaths.

“Suddenly, I saw people running all over the place shouting, ‘They have come! They have come!’” resident Umara Modu told The Associated Press. “I saw the attackers right inside our town but, surprisingly, they told us to calmly take our property and move out because we are not the target.”

He said about half the town’s population fled as the extremists entered without resistance. The fighters are thought to be with the Boko Haram faction under Abu Mus’ab al-Barnawi that has the backing of the Islamic State organization.

“I will never go back to Gudumbali again, no matter the assurance, because we went back after the military authority and the Borno state government promised us adequate security,” Modu said.

Gudumbali was the site of one of the deadliest encounters in the fight again Boko Haram, with scores of soldiers killed in 2015.

The town also was among the first communities targeted in a military operation that launched earlier this year to return thousands of people displaced by Boko Haram to their homes in Nigeria’s northeast with the goal of resuming normal life.

The government under President Muhammadu Buhari more than once has declared Boko Haram defeated but the extremists continue to carry out attacks in the impoverished northeast and Lake Chad region.

The security situation is a major challenge in Africa’s most populous country as elections approach next year.