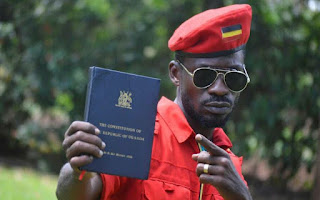 KAMPALA, UGANDA (AP) — A pop singer and prominent critic of Uganda’s government was due to face a military court on Thursday for his alleged role in clashes in which the longtime president’s motorcade was attacked by people throwing stones.

Lawmaker Kyagulanyi Ssentamu, whose stage name is Bobi Wine, will be tried under military law because he allegedly possessed a gun when he was arrested in the northwestern town of Arua earlier this week, a government official told lawmakers.

Ssentamu’s wife insisted he doesn’t know how to handle a weapon, and rights activists demanded his release. In a suburb of the capital, Kampala, small groups of his supporters took to the streets and burned tires in protest but police quickly dispersed them, national police spokesman Emilian Kayima said.

Three other lawmakers arrested alongside Ssentamu were charged Thursday with treason in a magistrates’ court in the northern town of Gulu, where he was believed to be detained. It was not immediately clear what charges he might face.

The lawmaker has not been seen or heard from since his arrest, and many were worried about his safety after Uganda’s deputy prime minister told lawmakers he had been hospitalized in custody, without giving details.

The clashes broke out on Monday when Ssentamu and other politicians, including President Yoweri Museveni, were in Arua campaigning in a by-election to choose a lawmaker after the previous one was shot dead near Kampala in June.

Ssentamu’s driver was shot dead in the clashes. The lawmaker later posted a picture of the dead man on Twitter, saying he had been killed by the police “thinking they’ve shot at me.”

A group of lawmakers authorized by the parliamentary speaker to investigate the situation told reporters on Thursday that they had been unable to see the pop star.

Kizza Besigye, a four-time presidential challenger who has himself been detained many times, told reporters that Ssentamu’s case highlighted what he called “the hopelessness” of parliament before a military regime.

Museveni has said in a statement that Ssentamu and others would be “punished according to the law.”

Ssentamu, who is his 30s and was elected to parliament last year, has emerged as a powerful voice with his calls for young people to “stand up” and take over this East African country from what he calls the current government’s failed leadership.

In hotly contested by-elections this year he has backed candidates who emerged victorious, signaling his rise in ranks of the political opposition. Many followers urge him to run in the next presidential election in 2021.

Museveni, a key U.S. security ally, took power by force in 1986 and has since been elected five times. The last vote in 2016 was marred by allegations of fraud.

Although Museveni has campaigned on his record of establishing peace and stability, some worry that those gains are being eroded the longer he stays in power. Museveni, who is 73, is now able to seek re-election in 2021 because parliament passed legislation last year removing a clause in the constitution that had prevented anyone over 75 from holding the presidency.

Uganda has not witnessed a peaceful transfer of power since independence from Britain in 1962.