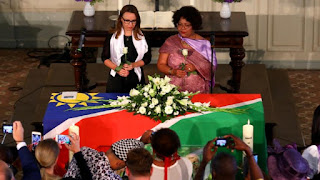 Germany has previously repatriated human remains to Namibia in 2011 and 2014. Net. Image via The New Times

Skulls and other remains of massacred tribespeople used in colonial-era experiments to push claims of European racial superiority were handed over by Germany to Namibia at a church ceremony in Berlin on Wednesday.

In what historians call the first genocide of the 20th century, soldiers of German Kaiser Wilhelm slaughtered some 65,000 Herero and 10,000 Nama tribespeople in a 1904-1908 campaign in retaliation for a revolt against land seizures by German colonists.

Herero chief Vekuii Rukoro said the handover ceremony on Wednesday should have taken place not in a Berlin church, but a German government building.

He also accused Germany of taking too long to formally apologise for what is often called the first genocide of the 20th century.

“By trying not to acknowledge the past, the German government will continue to make serious mistakes as regards present and future policies,” Rukoro told the church audience, which included government officials from both countries.

“We are after all the direct descendants of these remains and we should not be ignored.”

A Namibian delegation formally received the remains, including 19 skulls, a scalp and bones, during the church ceremony.

Michelle Muentefering, a minister of state for international cultural policies in the German foreign ministry, asked “for forgiveness from the bottom of my heart” as she handed over the remains to Namibia’s culture minister.

“May the remains of our ancestors finally go home to Namibia in peace. May they return to the dust from which they came. May justice be done and faith in humanity be restored,” said Johannes Isaack, Nama chief.

Outside the venue, some two dozen protesters held up signs that read: “Repatriation without an official apology?” and “Reparations Now!”.