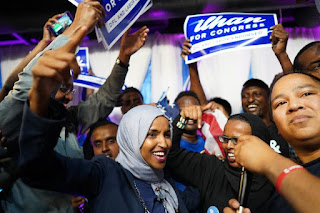 State Rep. Ilhan Omar captured the Democratic nomination for Minnesota’s 5th Congressional District on Tuesday, defeating a former Minnesota House Speaker and longtime state senator. It puts another notch in the meteoric political rise of a woman who spent her childhood in a Kenyan refugee camp and immigrated to the United States at age 12 before winning her seat in the state House in 2016.

A Republican has not won the heavily liberal Minneapolis-area congressional seat in many decades, making Tuesday’s primary the de facto election. The seat opened when Ellison launched a last-minute bid for attorney general, leaving the seat after six terms.

Supporters cheered Omar on when she took the stage to claim victory.

“Two years ago, many of us gathered to make history by electing me to the Minnesota House. And I am more than excited that we are gathered here again to make another history, because we’re going to Washington!” Omar told them.

Omar also paid tribute to the young volunteers who helped turn out the vote that gave her a decisive plurality in the crowded race.

“This victory belongs to the college interns, the high school interns who showed up before everyone else did, and who left after everyone was gone,” she said.

Omar and Rashida Tlaib — a Palestinian-American who won a Detroit-area Democratic primary in Michigan last week and is running unopposed in November — are poised to become the first two Muslim women to serve in Congress when they’re sworn in.

Omar has leaned heavily on her biography, positioning herself as the candidate best equipped to counter President Donald Trump in Congress. She defeated former House Speaker Margaret Anderson Kelliher and state Sen. Patricia Torres Ray, among other candidates, to advance to the November election.

Omar won her state House seat in 2016 after defeating a well-regarded, 44-year incumbent in a Democratic primary. She’s served just a single term in the House, stuck in the minority and boasting few legislative accomplishments.

But she brought undeniable star power to the race, riding the fame from her history-making election to a spot on the cover of Time magazine and a cameo in a recent Maroon 5 music video.

She won late support from Alexandria Ocasio-Cortez, the New York City congressional candidate who unseated a longtime incumbent in June.

Sign up for “Politics in Focus,” a weekly newsletter showcasing the AP’s best political reporting from around the country leading up to the midterm elections: http://apne.ws/3Gzcraw
News Desk Politics Society The Associated Press
Reactions: