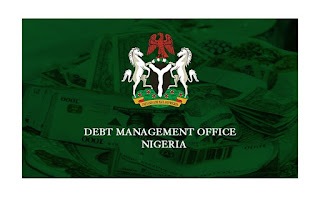 The debt office also said the federal government has so far borrowed a total of N410 billion locally to finance the N9.12 trillion 2018 Budget, which was assented to on June 19 by President Muhammadu Buhari.

Briefing journalists on the status of Nigeria’s public debt in Abuja, the DMO Director General, Ms. Patience Oniha, stated that there was no foreign borrowing so far to support the 2018 budget.

This, she noted, was because the National Assembly was yet to approve the 2018 borrowing plan.

The 2018 Budget is configured with a N1.643 trillion borrowing window, comprising N850 billion foreign component and N793 billion to be sourced locally.

Also speaking about the nation’s debt burden, Oniha said: “Our borrowing is not excessive. It goes through a rigorous process. If the government did not borrow so much in the last three years, it would not have been able to function. The huge borrowings sprang from the fall crude oil revenue and the attendant devaluation of the naira.

“Even at that, the DMO does annual debt sustainability analysis. A group of finance and economic experts do this. They project up to 20 years forward.

“They adjust some variables like if oil price falls, if production crashes and all that. They consider all the ‘what ifs’.

“The overall objective is to ensure that Nigeria’s debt is sustainable, and this debt management strategy has already started yielding results. One of the beneficial outcomes is the rebalancing of the debt stock.

The above variables, she noted, had resulted in lower interest rates for the benchmark FGN securities from about 18.5 per cent in January 2017 to 11-14 per cent in the first half of 2018.

The DMO recently warned that the nation’s high debt-service-to-revenue ratio, which deteriorated in 2016, could trigger a debt crisis.

This was contained in its 2017 Debt Sustainability Analysis (DSA), which pointed out that the country could experience a debt crisis in the event of prolonged shocks (decline) in revenue, exports and naira devaluation.

The DMO had also stated that for the country to stay within its 25 per cent debt-to-Gross Domestic Product (GDP) threshold, the three tiers of government should not borrow more than $6.25 billion in the 2018 fiscal year.

It stated: “The Fiscal Sustainability Analysis for the Federation (federal, states and FCT), showed that the ratio of total public debt-to-gross domestic product (GDP), remained below its threshold throughout the projection period.

It would be recalled that the DMO had on March 14, 2018 stated that the rate of increase of debt servicing, would reduce, going forward, given the federal government attention on raising revenue through the Voluntary Assets and Income Declaration Scheme (VAIDS), as well as targeted efforts to increase local production of some of the goods responsible for high foreign exchange demand.

However, at the expiration of the tax amnesty on June 30, only N30 billion was realised, far from the projected $1 billion.

At Tuesday’s briefing, Oniha who provided more insight on the public debt, said there was a marginal increase of 3.01 per cent over the public debt stock for December 2017.

The rise in the public debt stock over the six months period, she explained, was occasioned by the $2.5 billion Eurobond issued in February 2018.

“With the redemption of about N840 billion of Nigerian Treasury Bills, more funds were available for lending by banks to the private sector. External capital raising activities also contributed to the increase in external reserves.”

Commenting on the portion of states’ debt, Oniha said they were permitted to apply 40 per cent of their revenue for debt servicing and operating with the remaining 60 per cent.
News Desk Nigeria Society This Day