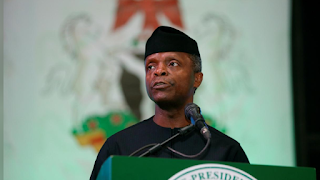 ABUJA (REUTERS) - Nigeria’s acting president has ordered the overhaul of a police unit following allegations of human rights violations, his spokesman said on Tuesday, as the government seeks to burnish its security record ahead of February’s presidential election.

Vice President Yemi Osinbajo is temporarily head of state while President Muhammadu Buhari, who plans to stand for re-election, takes a 10-day holiday in Britain.

Buhari came to power in 2015 on pledges to make Nigeria safer but violent crime remains endemic, a jihadist insurgency continues in the northeast, and security forces are regularly accused of acting with impunity.

Osinbajo instructed the head of the Nigeria Police Force (NPF) to reform the Special Anti-Robbery Squad (SARS) and ordered an independent investigation after “persistent complaints and reports” that bordered on “allegations of human rights violations”, a presidency statement said.

The unit - responsible for tackling serious crime such as armed robbery, kidnapping and cattle rustling - has been dogged by allegations of abuses for years, although the NPF has repeatedly denied any wrongdoing.

Following Osinbajo’s instruction, NPF chief Inspector General Ibrahim Idris “ordered the immediate overhauling” of the unit, which would have a new head and human rights desk officers, and be renamed the Federal Special Anti-Robbery Squad (FSARS), the NPF said in a statement.

Last year, a social media campaign called for SARS to be disbanded as people shared stories, photographs and videos of alleged mistreatment.

The upper house of parliament voted in December 2017 to investigate SARS and, in the same month, Idris announced that the unit would be reorganized. The findings of the inquiry have yet to be announced.

Last week, Osinbajo fired Lawal Daura, head of the state security police, in the wake of a blockade of parliament by its agents.

On Tuesday, police detained a journalist for refusing to reveal the source of an article on a confidential letter from Idris to Osinbajo saying Daura had been behind the blockade, the reporter’s newspaper said.