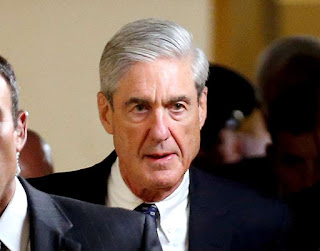 WASHINGTON (THE WASHINGTON POST)--Special counsel Robert S. Mueller III indicated this week that he is willing to reduce the number of questions his investigators would pose to President Trump in an interview, renewing negotiations with Trump’s lawyers about a presidential sit-down after an extended standoff, according to two people briefed on the negotiations.

The latest proposal by the special counsel comes as Trump has stepped up his attacks on his investigation and Mueller personally.

For months, Mueller has been seeking to question the president as part of his investigation into Russia interference in the 2016 campaign, which is also examining whether Trump has sought to block that probe.

In a letter sent Monday, Mueller’s team suggested that investigators would reduce by nearly half the number of questions they would ask about potential obstruction of justice, the two people said. It’s unclear which topic or topics would be left out.


The two sides have been at an impasse since March, when Mueller raised the possible threat of subpoenaing the president.

Earlier this summer, Trump’s legal team sought to set specific conditions on an interview and make central topics off limits — conditions they believed would be dealbreakers for the special counsel.

Among them: that Mueller not ask any questions about actions Trump has taken as president, including his private discussions with then-FBI Director James B. Comey.

Trump attorney Rudolph W. Giuliani told The Washington Post earlier this month that he believe such questions could unfairly expose Trump to claims of perjury.

Jay Sekulow, one of Trump’s attorneys, declined to comment on the new Mueller proposal about a presidential interview and whether the Trump team might accept the offer.

“There continue to be ongoing discussions,” Sekulow said. “Nothing’s decided.”

Giuliani told reporters in New Hampshire on Wednesday that Trump remains willing to be interviewed if the lawyers can agree on ground rules.

“I’m not going to give you a lot of hope it’s going to happen,” he said on CNN. “But we’re still negotiating.”

“He’s always been interested in testifying,” he added. “It’s us — meaning the team of lawyers, including me — that have the most reservations about that.”

Peter Carr, a spokesman for the special counsel’s office, declined to comment.

In the wake of the proposal by Mueller’s team, Trump stepped up his assault on the special counsel investigation, tweeting Wednesday that the Justice Department should shut it down.

“This is a terrible situation and Attorney General Jeff Sessions should stop this Rigged Witch Hunt right now, before it continues to stain our country any further. Bob Mueller is totally conflicted, and his 17 Angry Democrats that are doing his dirty work are a disgrace to USA!” he wrote.

When Mueller first proposed a presidential interview in late December, Trump was keen to do it. He told his lawyers he wanted to clear up any questions Mueller had and believed he could put to rest questions about whether his campaign coordinated with Russia in the 2016 election.

But Trump’s lawyers have been wary of a sit-down with prosecutors. Giuliani has repeatedly warned that such an interview would expose Trump to legal danger, saying that if Trump made any misstep or if Mueller later determined that other witnesses were more credible than Trump about what he had said and done, the president could face accusations of perjury.

In negotiations with Mueller this spring, Trump’s legal team sought a deal in which the president could provide written answers to some of the special counsel’s questions. They also pressed Mueller’s investigators to demonstrate that they cannot obtain the information they are seeking without interviewing the president.