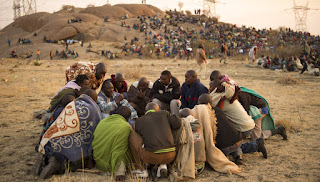 Lonmin employees gather on a hill called Wonderkop at Marikana, outside Rustenburg in the North West Province of South Africa August

MARIKANA, SOUTH AFRICA (DAILY MAVERICK)--While South Africans recently commemorated the sixth anniversary of the Marikana Massacre, when police opened fire, killing 34 mineworkers and injuring 78 others during a strike action at Lonmin’s Marikana operations on 16 August 2012, the Independent Police Investigative Directorate has had to conduct investigations without the promised funding.

In a presentation that was due to be made to Parliament’s Standing Committee on Public Accounts this week, IPID stated that while it had done “its best” in attempting to comply with recommendations of the Farlam commission, funding for the investigation into Marikana miners’ deaths had not been forthcoming.

The lack of support for IPID, considering that 34 people died in this shocking first massacre implicating the South African Police Service in post-apartheid South Africa, points to a disturbing lack of political nous on the part of the governing ANC.

Responding to questions in Parliament after his first State of the Nation speech in February 2018, President Cyril Ramaphosa, who had been a Lonmin director and shareholder at the time of the Marikana massacre, said the event “stands out as the darkest moment in the life of our young democracy”.

IPID had conducted a detailed investigation covering several locations at Markiana where police shot at the striking workers in 2012. The directorate also investigated scenes where 10 others had been killed in the days before the massacre, including two police officers. All in all, IPID had performed 184 crime scene reconstructions.

In its report back to Scopa, IPID said that it had found that SAPS had lied to the Farlam Commission that miner Van Wyk Sagalala had died in hospital when he had in fact died in the back of a police truck.

“During the investigation of the Marikana incident, IPID discovered a photo album depicting the deceased inside the Police truck (canter) that was utilised on the 16 August 2012 to transport the arrested miners from the scene to the detention centre.”

There had been no “chain of custody”, said IPID, as to how Sagalala had been “handled” from the detention centre to the government mortuary.

The IPID investigation had uncovered “that the same deceased was collected by the government mortuary at Andrew Saffy Hospital. The investigation revealed that indeed the deceased died inside the police canter at the detention centre and the SAPS failed to report that death to IPID as stipulated in terms of Section 29(1) of the IPID Act.”

SAPS, IPID charged in its report back, had lied to the Farlam Commission that Sagalala had died in hospital.

“There is overwhelming evidence to support that SAPS intentionally failed to disclose the information to the Commission.”

Investigations of five deaths that had occurred on 12 August 2012 had been completed and had been handed to the NPA on 24 April 2017 for a decision.

Six additional charges of attempted murder had been added with regard to miners who had been chased by police towards a nearby stream where one miner was shot dead.

“Evidence in our disposal revealed that all these deaths were caused by police actions.”

Colonel Salmon Vermaak, who had been highly critical at the Farlam Commission of Mpembe’s conduct at the time, is facing one count of murder, that of 45-year-old father of five, Pumzile Sokanyile, who was shot in the head. Vermaak is also charged with contravening Section 6(2) of the Commission Act.

All the SAPS members appeared in the Rustenberg Magistrate’s court in March in 2018. The case was postponed to 12 September for pre-trial and transfer to the High Court.

The investigation in relation to the 34 deaths that occurred on 16 August 2012 had been finalised and had been referred to the NPA on 1 August 2017 for decision.

“IPID is still awaiting decision in this regard, including a way forward on the scene two reconstructions.”

Four SAPS members, Major General Mpembe, Brigadier Gideon Jacobus Van Zyl, Brigadier Dingaan Madoda and Lieutenant Colonel Oupa Pule, had been charged with defeating the ends of justice in relation to the death of Sagalala, who died in the police truck. Their case has also been postponed till September for pre-trial and transfer to the high court. DM
Africa News Desk Society South Africa