In Book, Omarosa Says Trump Is A Bigot, Behaved ‘Like A Dog’ 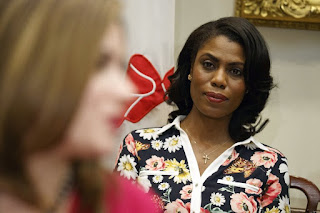 BRIDGEWATER, N.J. (AP) — Former White House staffer Omarosa Manigault Newman claims in a new book that there are tapes of President Donald Trump using racial slurs and that she saw him behaving “like a dog off the leash” at numerous events he attended without his wife, first lady Melania Trump.

The accusations are among a long list of scandalous claims contained in her new book, “Unhinged,” set to come out Aug. 14. The Associated Press purchased an early copy of the memoir, which the White House has already slammed as “riddled with lies and false accusations.”

In the book, Manigault Newman, who was a contestant on Trump’s “The Apprentice” reality show and later served as a senior adviser to the president, hurls a litany of allegations, painting the president as scattered, self-absorbed, misogynistic and insecure.

Trump, she said she’d concluded after years of defending him, was a bigot.

“I didn’t want to believe it,” she writes. “I rejected what other people said about him because they didn’t know him like I did. I had to go through the pain of witnessing his racism with my own eyes, and hearing it with my own ears, many times, until I couldn’t deny it any longer.”

She also claims without evidence that tapes exist of the president using the N-word repeatedly on the reality show’s set. She acknowledges she had never been able to obtain or hear the tapes but said three unnamed sources had described their contents.

Manigault Newman also alleges that allies of the president tried to buy her silence. When she left the White House, she says she was offered $15,000 a month to serve in a “senior position” on Trump’s 2020 re-election campaign. But that offer came along with a stringent nondisclosure agreement that was as “harsh and restrictive” as she had seen while working in television.

After turning down the job, she said she received a “flurry” of letters from attorneys representing the president telling her to “stay silent about Trump, or else.”

Throughout the book, Manigault Newman paints a deeply critical portrait of the president, describing him as a man who “loved conflict, chaos and confusion; he loved seeing people argue or fight.” She says she had seen him acting inappropriately at numerous events he attended without his wife at his Mar-a-Lago estate in Florida, including birthday parties, fundraisers and golf tournaments.

She also alleges that Trump has exhibited signs of a “mental decline that could not be denied” and says she went as far as printing out a study linking Diet Coke consumption to dementia and strokes and putting it in his briefing stack.

The White House responded by slamming the book and its author and chastising the press for writing about it.

“Instead of telling the truth about all the good President Trump and his administration are doing to make America safe and prosperous, this book is riddled with lies and false accusations,” said White House press secretary Sarah Huckabee Sanders. “It’s sad that a disgruntled former White House employee is trying to profit off these false attacks, and even worse that the media would now give her a platform.”
AP News News Desk Society