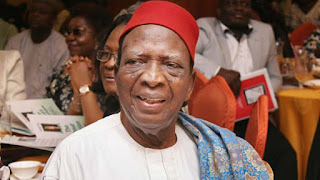 Ben Nwabueze image via The Guardian


ENUGU (THE GUARDIAN)--The Ben Nwabueze-led Igbo Leaders of Thought (ILT) has asked President Muhammadu Buhari to immediately set up a constituted assembly that will midwife a new constitution for the country before the 2019 general elections.

In a communiqué released after their meeting in Enugu yesterday, the group said the call became necessary following the alleged general rejection of the 1999 Constitution, stressing that the observed flaws from the constitution would continue to affect election outcomes if not checked.

The communiqué, signed by Nwabueze, further said that a new constitution before the general elections had become inevitable as a result of the plethora of challenges faced by the country as well as the rejection of the 2014 National Conference by the Federal Government.

In another development, the Yoruba socio-cultural group, Afenifere, has warned of a major political cataclysm that can plunge the nation into full-blown dictatorship if the simmering face-off between the National Assembly and the Executive is not stemmed.

It noted that though Nigeria has in recent years gone through several political turmoils, the development in the country in the past three weeks has reached a frightening dimension.

Afenifere’s spokesperson, Yinka Odumakin, stated these yesterday at an event organised by Rivers State government in Port Harcourt to mark the 70th birthday of former Governor Peter Odili, said the country had lost track and might descend into full-blown dictatorship and anarchy unless Nigerians check the slide.

Also, former Attorney-General of the Federation and Minister of Justice, Kanu Agabi, who was the guest speaker at the occasion, blamed the crisis plaguing the nation on failure to adhere to the tenets of the rule of law.

Agabi, who warned that power should be withheld from those who desire it, stated that with the proliferation of states and over seven hundred local councils, those not qualified for leadership and administrative role gained access to governance as the country was under pressure to provide the manpower required to run the system.

The former minister, who suggested the establishment of a national integration commission to deal with the problem of inefficiency that the country is currently grappling with, urged the political leadership to ensure that Nigeria becomes a nation where people don’t fight each other, but one where the citizens unite to fight ignorance and diseases.
Igbo Igbo Politics News Desk Society