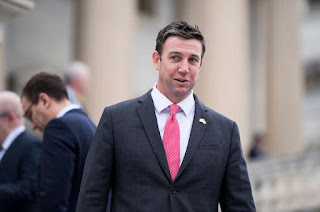 (ROLL CALL) -- California Republican Duncan Hunter and his wife, Margaret, have been indicted for allegedly using $250,000 in campaign funds for personal expenses, including dental work and trips to Italy and Hawaii.

To conceal their purchases, the Hunters misclassified purchases in their campaign finance records, labeling expenses as “campaign travel” or “dinner with volunteers” in submissions to the Federal Election Commission.

Hunter and Rep. Chris Collins of New York were the first members of Congress to endorse Donald Trump in 2016 in his run for the presidency. Both men have now been indicted.

The Justice Department alleges that instances of Hunter illegally using campaign money to pay for personal expenses date back to 2009, and the indictment chronicles them through 2016.

The criminal investigation began in June 2016, two months after the Federal Election Commission and the San Diego Union-Tribune questioned some of Hunter’s campaign expenses as potentially personal, according to a Justice Department release.

“The indictment alleges that Congressman Hunter and his wife repeatedly dipped into campaign coffers as if they were personal bank accounts, and falsified FEC campaign finance reports to cover their tracks,” said U.S. Attorney Adam Braverman in a statement. “Elected representatives should jealously guard the public’s trust, not abuse their positions for personal gain. Today’s indictment is a reminder that no one is above the law.”

The Hunters’ arraignment is scheduled for Thursday. The charges include conspiracy to commit offenses against the United States, wire fraud, falsification of records and prohibited use of campaign contributions.

According to the indictment, the Hunters overdrew their bank account more than 1,100 times in a seven-year period. They accrued approximately $37,761 in “overdraft” and “insufficient funds” bank fees. In the same period, the couple’s credit cards were charged to the credit limit, often with five-figure balances, resulting in approximately $24,600 in finance charges, interest, and other fees related to late, over the limit, and returned payment fees.

The Hunters discussed their near-empty bank accounts to determine when to use campaign funds and to withdraw cash from campaign accounts for personal use. They withdrew “petty cash all the time ... it was great,” according to the indictment.

Hunter has consistently ranked as one of the poorest members of Congress. For the past five years, he has listed no assets, according to Roll Call’s Wealth of Congress index.

Hunter’s campaign did not immediately respond to a request for comment, but it appears that his name will be on the ballot in November despite the indictment. Sam Mahood, a spokesman for California’s secretary of state, told Roll Call, “At this point there does not exist a process in elections code for him to have his name removed from the ballot.”

Hunter faces Democrat Ammar Campa-Najjar in the fall. Inside Elections with Nathan Gonzales rates the race as Likely Republican; that evaluation does not reflect Tuesday’s indictment.