Do Trump Tweets Cross Legal Line For Obstruction Of Justice? 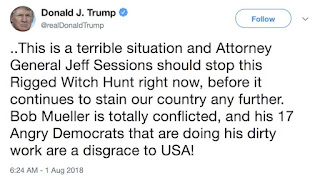 This image from the Twitter account of President Donald Trump shows a tweet on Wednesday, Aug. 1, 2018 calling for Attorney General Jeff Sessions to end the Russia investigation that raises difficult questions about whether Trump’s frequent use of Twitter might be used to build a case of obstruction of justice against him. (Twitter via AP)

WASHINGTON (AP) — President Donald Trump’s tweet on Wednesday calling for Attorney General Jeff Sessions to end the Russia investigation raises difficult questions about whether Trump’s frequent use of Twitter might be used to build a case of obstruction of justice against him.

The latest round of presidential tweets bashing special counsel Robert Mueller’s investigation fueled criticism that Trump is illegally interfering with the investigation. Just as quickly, the White House defended the tweets as expressing Trump’s opinion.


Amid a series of morning tweets, Trump wrote , “This is a terrible situation and Attorney General Jeff Sessions should stop this Rigged Witch Hunt right now, before it continues to stain our country any further. Bob Mueller is totally conflicted, and his 17 Angry Democrats that are doing his dirty work are a disgrace to USA!”

Mueller already is interested in some of Trump’s tweets to the extent they raise obstruction of justice concerns.

In obstruction cases, prosecutors have to prove beyond a reasonable doubt that a particular act got in the way of an investigation and that the person who did it intended to obstruct.

The difficulty in trying to use Trump’s tweet to prove obstruction is that he may have posted it for several reasons, including to rally support among his political base, said Jennifer Rodgers, a former federal prosecutor in New York who now lectures at Columbia Law School. In addition, Sessions recused himself from the Russia investigation, and Trump certainly knows that, having previously complained about it publicly, Rodgers said.

“If there are other credible reasons for doing something, you’ve kind of lost the beyond a reasonable doubt,” Rodgers said.

But statements like the one Trump made Wednesday could help round out an obstruction case that might be focused on an earlier act, like the firing of FBI Director James Comey, she said.

Rodgers was among several lawyers who said there is no reason a tweet could not be considered evidence — taking issue with comments from Trump lawyer Rudy Giuliani that scoffed at the idea of “obstruction by tweet.”

“I don’t know why Rudy seemed to think that obstruction by tweet is a crazy notion,” Rodgers said. Postings from Facebook and other social media are used in criminal cases, Rodgers said. “There are no separate rules of evidence for obstruction cases,” she said.


Former Justice Department official Neal Katyal said the medium is unimportant. “A tweet is like anything else. It’s a statement. Of course it can be considered evidence of obstruction, depending on what is said. The form (spoken, written, tweeted) is irrelevant, it’s the substance that matters,” Katyal wrote.

Trump critics said they read the tweet as pointed interference in the Mueller investigation.

Democratic Sen. Patrick Leahy of Vermont, a former prosecutor, took to Twitter to weigh in. “When I was a prosecutor, obstruction of justice was often hard to prove, requiring difficult-to-obtain evidence that the individual’s actions were truly intended to interfere with an ongoing criminal investigation. Oh how times have changed,” Leahy said.

Richard Painter, who served as an ethics lawyer for President George W. Bush, said in a telephone interview Wednesday that he would read the tweet as instructing Sessions to put himself back in charge of the Russia probe. “He’s instructing his attorney general, via Twitter perhaps, to stop the Russia investigation,” said Painter, a Democratic candidate for Senate in Minnesota.

She disputed the notion that Trump was directing Sessions to take action.

“It’s not an order,” Sanders said. “It’s the president’s opinion.”

Speaking Sunday on CBS’ “Face the Nation,” Giuliani said, “Obstruction by tweet is not something that I think works real well. Generally obstruction is secret. It’s clandestine. It’s corrupt. You don’t want the evidence out in the public so it can be used against you. And I’ve looked at all those tweets and they don’t amount to anything but the man complaining about an unfair investigation.”

As to whether he had advised the president to stop tweeting or at least stop tweeting about Sessions, Giuliani responded: “Good luck.”