Cohen And Manafort Show The System Is Working 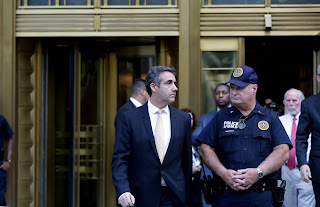 BY BLOOMBERG EDITORIAL BOARD

Yesterday, in a stunning spectacle, Trump’s former campaign chairman Paul Manafort was convicted on eight counts of tax and bank fraud, while his former lawyer, Michael Cohen, pleaded guilty to eight other crimes, including campaign-finance violations. It was, as Bloomberg News put it, “perhaps the worst day of his presidency,” which is saying something.

But the most striking aspect of this saga was something that didn’t happen. Trump has spent months trying to derail these investigations — and he has failed in every attempt. In that sense, yesterday’s drama exemplifies a broader dynamic at work: Despite grave challenges, the U.S. system of checks and balances is mostly holding up.

As these cases have unfolded, the president has raged and meddled to no end. He has declared special counsel Robert Mueller “disgraced and discredited.” He has called the Cohen investigation “an attack on our country.” At every opportunity, he has aired conspiracy theories, hurled insults, and otherwise tried to undermine the probes. He has pressured witnesses and investigators. He may well have obstructed justice.

Through it all, the Justice Department has largely maintained its independence. Federal prosecutors, who are effectively Trump’s employees, have nonetheless pursued his associates doggedly. Far from being discredited, Mueller’s probe has secured guilty pleas from five individuals and dozens of indictments in little more than a year. By all accounts, there are others to come.

More broadly, the U.S. constitutional system is weathering the stresses and burdens of the Trump era. The press has endured Trump’s withering rage but hasn’t stopped uncovering corruption and exposing falsehoods. Federal courts have impeded or mitigated many of Trump’s worst ideas. Watchdog groups have sued him repeatedly. The bureaucracy, notionally subordinate to the president, has found ways to inhibit his impulses and slow-walk his ill-advised orders. Even Congress has done its part. True, it hasn’t always been a profile in courage — for the sake of political expediency, it has neglected its responsibility to oversee the executive branch in profound ways. And yet it has not entirely abandoned its job: It has passed laws constraining the president, investigated wrongdoing by his campaign, and held his cabinet officers to account.

And thus a president who once mused about staying in power for life has instead foundered on the limits of his office, constitutional and otherwise. This is hardly a portrait of American authoritarianism. It shows a system of governance grappling with a president determined to undermine it — and mostly prevailing.

If recent history is any guide, though, the republic will survive this too. For all the chaos and corruption of Trump’s presidency, American institutions are holding it accountable. The rule of law is being upheld. And the president, rage as he might, can’t stop the wheels of justice.
Democracy Donald Trump News Desk Society