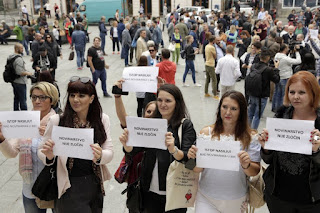 Bosnia journalists shows banners with the text “Journalism is not a crime” and ” Stop violence against journalists” in downtown Sarajevo to protest against the beating of a journalist in Sarajevo, Bosnia, Tuesday, Aug. 28, 2018. Bosnia’s journalists have held protests for a second day to express solidarity with a reporter from an independent Bosnian Serb television station who was badly beaten by unknown assailants. (AP Photo/Amel Emric)


SARAJEVO, BOSNIA-HERZEGOVINA (AP) — Bosnia’s journalists held protests for a second day on Tuesday to express solidarity with a reporter from an independent Bosnian Serb television station who was badly beaten by unknown assailants.

BNTV reporter Vladimir Kovacevic was hospitalized following the beating late Sunday outside his home in Banja Luka, the main town in the Serb-run part of Bosnia.

Hundreds of journalists gathered Tuesday in the Bosnian municipalities of Sarajevo, Zenica and Mostar, demanding an end to attacks on journalists in the war-ravaged country.

Some journalists in Sarajevo held notes reading “Journalism is no crime.” Participants said that media freedom has been in jeopardy in Bosnia ever since the 1992-95 war.

Faruk Kajtaz, who heads the journalists’ club of Bosnia, said “this is a problem that is definitely escalating.”

“I fear what is going to happen next, especially because we have the election campaign coming,” he added, referring to the Oct. 7 general vote.

Prosecutors have said they are treating Kovacevic’s beating as attempted murder, while Bosnian Serb police said Tuesday they have questioned more than 20 people and found evidence.

BNTV has faced criticism from Bosnian Serb authorities for its independent editorial policies. A regional Balkan journalism network said Tuesday that Bosnia’s politicians have created an “atmosphere of fear and violence.”

“If this case remains unresolved, we will consider that the authorities are behind the attack on Kovacevic,” the statement added.