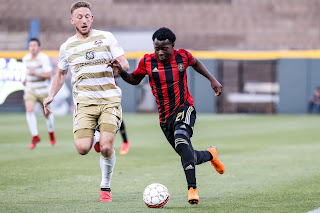 George Bello makes his way past a defender during an Atlanta United 2 match vs Louisville City at Coolray Field in Lawrenceville on April 21. Image: Karl L. Moore/Atlanta United

George Bello, a native of Nigeria who grew up in Douglasville, Ga., trained with Atlanta United’s first team Friday. Bello, a 16-year-old fullback, recently rejoined training after recovering from a hip injury.

“Starting yesterday, after he was given his medical clearance, he’s going to train with us,” Martino said through a translator Friday.

There’s a chance the youngster could be included in Atlanta’s 18-man roster against Toronto because the depth chart for outside backs is depleted. Sal Zizzo, Mikey Ambrose and Greg Garza are all injured, and Franco Escobar has to sit out a match due to yellow card accumulation.

Because of the injuries, Escobar’s suspension and a coach-imposed benching of Ezequiel Barco, what lineup and formation Martino will use Saturday has been a hot topic. The Argentine manager remained tight-lipped and wouldn’t tip his hand.

“I don’t even know,” Martino said, adding that playing a 3-5-2 could be a possibility. “In that case, we wouldn’t need a right back.”

Leandro Gonzalez-Pirez didn’t seem too worried about which personnel or formation the Five Stripes go with.

“We have a lot of players out, but we’re trying to make a good formation for the game and we’ll try to give our best effort to win the game with good defense,” the Argentine defender said.

While Bello has never played in an MLS match, he has plenty of experience elsewhere.

Bello has played international matches and been called into camps for the United States at the under-15 through under-18 levels. He also appeared in three games, all starts, for Atlanta’s United Soccer League affiliate, ATL UTD 2. In those games, Bello tallied five interceptions, two blocks, an 81 percent completion rate on passes and won five fouls.

However, because of the hip injury he suffered earlier this season, he hasn’t played in a match since April 21. His fitness level remains unclear.

While Bello could be included in the 18-man roster, it is likely Miles Robinson or Andrew Wheeler-Omiunu starts in place of Escobar. Martino could revert to a three-man back line, too, something Atlanta used earlier this season.

Chris McCann doesn’t expect major changes to the formation or the lineup.

“I don’t think (Martino) is going to change things to drastically. We have a lot of options with (Robinson and others),” McCann said. “I don’t think there’s going to be too much shuffling around with the pack. I think we’re going to keep the same shape, same team. They’ll make minimal changes to avoid total disruption to moving people everywhere. I think that was Tata’s idea.”
Ahia Mgbede Soccer Society Sports