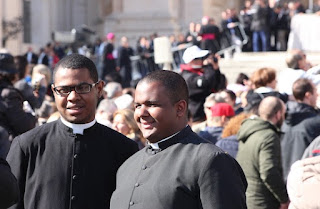 PHOENIX (LA CROIX INTERNATIONAL)--The Catholic Diocese of Phoenix in the U.S. state of Arizona has come a long way since priests from Ireland planted roots there, with 30 African priests from 13 different congregations now spread among its parishes.

While foreign-born priests are dotting the radar in states such as California, Texas and New York, this southern state has made up for a shortfall by welcoming clerics from Nigeria, Uganda, Ghana, South Sudan and Tanzania, according to The Catholic Sun.

“We are a missionary diocese,” Sue Schindel, who represents the vicar for priests office in Phoenix Diocese, was quoted as saying in August. “We don’t have enough priests in our diocese to sustain the needs of our people.”

“The African nations are part of the missionary pool we draw from to ensure we have priests so parishioners can celebrate their freedom of religion and their Catholic faith in their neighborhood parish,” she added.

The state welcomed over 60 members of the African Conference of Catholic Clergy and Religious in the United States including 43 African priests and 16 nuns for the group’s annual conference from Aug. 1-4.

The four-day conference focused on the theme of a global church and the implications of this for the Church in Africa.

In a keynote speech, Dominican Father Aniedi Okure, who grew up in Nigeria, blamed a “leadership deficit” and widespread corruption for the resource-rich continent’s continued poverty.

He also noted the huge growth of Catholic priests and lay people in Africa, with the media reporting how as of 2010 some 16 percent of Sub-Saharan Africa identified as Catholic, up from 1 percent a century earlier.

Father Fred Adamson, vicar general for Phoenix Diocese, said African clergy teach with “great missionary zeal” and are willing to come as “humble servants to a strange land and foreign culture to serve.”

“They have brought a tremendous love for the Gospel into our congregation,” Nancy Welton, a local parishioner of 19 years, told the media.
Africa Essay Religion Society United States