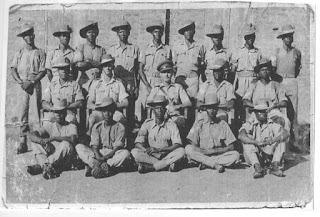 
(LOUGHBOROUGH ECHO)--A LOUGHBOROUGH historian has launched a campaign to force the British Government to apologise for its “racist, discriminative and disgraceful” behaviour in West Africa during World War Two.

Dr Robert Peprah-Gyamfi has lodged a petition at parliament which calls for “historic restitution” following the conscription of more than 50,000 West African men and the “shocking” treatment of 200,000 others.

The author says that many were physically dragged from their homes in the former British colonies of Ghana, Nigeria, Sierra Leone and Gambia on the direct order of Her Majesty’s Government.

They were among 250,000 West Africans who were sent to the frontline to fight the Axis powers between 1939 and 1945. Thousands never returned home and countless others were injured.

And he claims almost all experienced racial discrimination and unfair treatment at the hands of their “white masters”.

But he says that despite their sacrifice, the UK government has never apologised and to this day has refused to officially recognise the vital role those men had to play in defeating Nazi rule.

The 56-year-old, who was born in Mpintimpi, near Accra, Ghana, is now calling on the West African community in Britain and beyond to support his cause.

In addition to the petition, he is also in the process of launching a charity dedicated to the families of West African troops called the West African Benevolent Trust. [www.WabTrust.com] and is organising a public protest in London in August.

The father-of-three said: “It is disgraceful that, in this day and age, the government still refuses to apologise for its shameful practice of forced conscription, decades after the event.

“It should not be forgotten that without the involvement of these brave men, the world as we know it would be very different.”

The West Africans served in the Royal West African Frontier Force (RWAAF) as part of the Commonwealth Army and were deployed against the Axis powers in Africa, as well as in Burma and Southeast Asia.

Dr Peprah-Gyamfi said all West Africans faced discrimination at the hands of the British. They served in segregated units and there was no equality of pay or treatment compared to British soldiers.

Dr Peprah-Gyamfi’s latest books, World War II Revisited: Memoirs of a Forced African Conscript and its sequel, Twins Divided, both deal with the subject of forced conscription and are based on his own family’s experiences.
News Desk Society West Africa