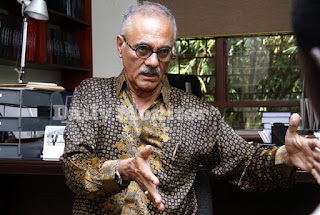 Prof Mahmood Mamdani during the interview at his office in Makerere University, Kampala recently. Photo by Abubaker Lubowa via Daily Monitor

KAMPALA, UGANDA (DAILY MONITOR)--Intellectual debate in Africa is on its death bed due to bad successive governments since independence of several countries, scholars have observed.

“At a time when the scholar, dedicated to excellence, has spread wings and taken flight, the public intellectual has turned into a government-linked consultant or an agitator in the ranks of the Opposition,” Prof Mahmood Mamdani, the Makerere Institute of Social Research (MISR) director, said on Tuesday.

This was during the commemoration of the 57th anniversary of Transition Magazine at Makerere University.

It was banned in Uganda in 1968 and is currently published at Harvard University in the United States.

Prof Mamdani said today’s intellectual focusses on abuse of power or the brutal silencing of Opposition – whose energies are invested totally in regime change that the intellectual has little time to reflect on larger social issues.

Dr Ogwang said the magazine deserves credit for, among other things, providing a platform and occasion for heralding a new mode of critical debate about African literature.

Its founder, Rajat Neogy, died in 1995 aged 57 in the US, but his daughter Tayu Neogy, who spoke briefly on Tuesday, said “even when he died, Uganda remained his home.”
Africa News Desk Society Uganda