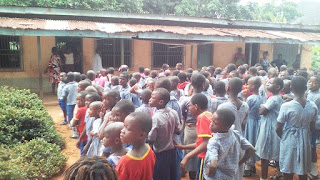 Image via The Oracle


ANAOCHA LGA, ANAMBRA (THE ORACLE)--Members of Igbo Women in Diaspora, as American based non-profit organisation have pledged to partner with Anambra state government in the area of enhancing academic environment at the primary schools level in the state through the provision of educational materials and re-construction of some dilapidated buildings.

President of the Association, Mrs. Eunice Onwunyi who made the pledge during an assessment visit to Good Shepherd Nursery/Primary School, Nri in Anaocha Local Government Area of the state, said the partnership was in tandem with the core aim of the organisation, which is creating a comfortable learning environment for the children.

Represented by a member of the association, Mrs. Nkiru Udoji, Onwunyi said Good Shepherd Primary School had been chosen in the pilot scheme of the empowerment, adding that the association was currently working assiduously to ensure that every school in Igbo land was well equipped.

She also indicated the association’s willingness to assist in improving on the state of infrastructure in Good Shepherd Primary school, adding, “We are determined to elevate this school by our promise to look towards reconstruction of the dilapidated buildings and supply of some teaching aids.

“All we need to achieve these is just a moral support from the state government in order to produce intellectual adults who would equally embark on similar journey that will create brighter future for upcoming generations.

“Once we get the government moral support, we shall rally support from our sister Igbo Women Organisations and compassionate individuals to join Federal’s Government feeding programme to enhance the life of children”, she further pledged as she commended the Federal Government’s School feeding initiative which she said had increased child nutrition and school enrolment among our children.

Urging the government to expand the programme to cater for more pupils, Onwunyi noted that although, Good Shepherd was not benefiting from the initiative, participating schools the have so far visited indicated that the initiative had increased child nutrition and school enrolment.

She recalled that Vice President Yemi Osinbajo had launched the National Home Grown School Feeding (HGSF) programme in 2017 as part of a N500 billion-funded Social Investment Programme, which is aimed at supporting state governments to collectively feed over N24 million school children across the country.

Responding, the Superintendent of the School, Rev. Cannon Reuben Okafor, who expressed happiness with the organization, said the school buildings were dilapidated.

“You can see the old school buildings which accommodate over 700 pupils and 13 teachers, were built in the colonial era and have all dilapidated, Cannon Okafor stated, adding, “We have made all necessary contacts both to the state government, NGOs and other spirited individuals to come to our rescue but none could help. Therefore, your visit today is like a dream come true and we ask God to strengthen the Women in Diaspora for embarking on this rescue mission”.

He disclosed that the school had managed to cast over 4,000 blocks for a proposed two-storey building complex.

Also speaking, the Palace Secretary of Nri traditional kingdom, Chief Chijioke Ifeka expressed the hope that when implemented, the empowerment programme by the Igbo Women in Diaspora would give facelift to the school.
Igbo Igbo Diaspora News Desk Society
Reactions: