In Uganda, Modi Says Africa Is A Top Priority For India 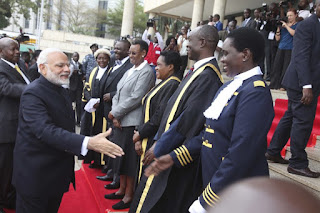 KAMPALA, UGANDA (AP) — Indian Prime Minister Narendra Modi pledged Wednesday to “intensify and deepen” his country’s engagement with Africa, saying his government will do more to support governments across the continent.

In remarks to Uganda’s legislature, Modi said that “Africa will be at the top of our priorities,” adding that India intends to open 18 embassies in Africa.

He later was set to attend the BRICS summit of emerging economies in South Africa.

“India is proud to be Africa’s partner,” Modi said. “Our development partnership will be guided by your priorities. It will be on terms that will be comfortable for you, that will liberate your potential and not constrain your future.”

India has been trying to expand trade relationships in Africa. Total trade between them increased almost five-fold between 2005 and 2016, reaching $52 billion, according to the trade group Confederation of Indian Industry. In 2015 Modi invited African leaders to New Delhi for an India-Africa summit that was the biggest of its kind.

The Indian prime minister on Tuesday announced his government would lend Uganda up to $205 million to expand its electricity grid and boost commercial farming.

In his remarks to Uganda’s legislature, Modi extoled the ideals of Indian independence leader Mahatma Gandhi, saying: “India’s freedom will remain incomplete so long as Africa remains in bondage.”

India’s government is planning to build a Gandhi heritage center at the source of the Nile River in eastern Uganda where some of Gandhi’s ashes were immersed, he said during his two-day visit.

Uganda has a substantial Indian community, including a group of industrialists who have flourished in the years since they returned to claim assets that had been seized during the rule of dictator Idi Amin.

In 1972 Amin ordered the expulsion of Asians, many of them Indian traders, from this East African country, saying he wanted to put the economy back in the hands of Ugandans. Most of the seized property has since been handed back to the original owners by President Yoweri Museveni’s government.

Since then businessmen of Indian origin have invested heavily in Uganda’s manufacturing, agricultural processing and pharmaceutical sectors.