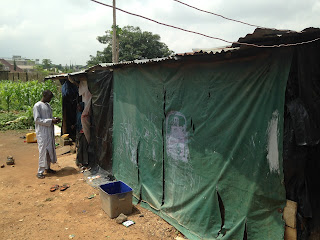 In Abuja, Mohammed Ahmed and his extended family survive on just £1.50 a day, including what he sends to relatives in Maiduguri to help them buy food. Photograph: Isaac Linus


ABUJA (THE GUARDIAN)--Families living on £1.50 a day or less tell of the hardships of life in the oil-rich nation, which now has the greatest concentration of extreme poverty

Nkechi John, 39, lives in a single room with her four children and husband, who is a welder. Their daily lives are fairly typical of people in poverty in Nigeria, which according to the Brookings Institution now has the world’s greatest number of extreme poor.

“Most of my customers are bricklayers, plumbers, electricians. I couldn’t even sell all of the cake I made today to make up to 400 naira.

“I am tired of life,” she says, adding she can believe poverty is now worse than in India. “The suffering’s too much. The president and government need to do something before we all die.

“I try to do some farming, but there is no money to buy fertiliser and the crops have all turned yellow due to the lack of it. And only two of our school-age kids are in school because we can’t afford it.”

Uche Joseph Uwaleke, an economist at Nasarawa State University in Nigeria’s central region, explains why there has been an increase in extreme poverty. “There is the issue of insecurity in the north-east. Although the Boko Haram violence has been reduced to a manageable level, local farmers in that region are still afraid of going to farms.

“Despite the end of the recession, manufacturing, the transportation sector and agriculture have still not recovered.”

He also blames poor governance. “The late approval and poor implementation of the budget is another reason for the growing poverty. All of this affects jobs.”

Although Uwaleke sees glimmers of hope from policies to improve Nigeria’s chronic poverty he is concerned that the situation remains fragile.

Life is also a struggle for Mohammed Ahmed, 33. The Islamic teacher and father-of-four comes from Borno state and now lives in Abuja. He and his extended family have just £1.50 a day to live on, including what he manages to send to relatives in Maiduguri to help them buy food.

“Because of Boko Haram they cannot go to the farms because they are afraid they will be killed. Nobody is farming in Borno state except within Maiduguri, the state capital. But I can’t give them anything because I struggle to take care of my family.”

Like Nkechi John, he also struggles to buy fertiliser he needs to grow the crops on his small farm.

“The government says one 50kg bag should cost 5,500 naira but that is not even available. So we have to buy in the open market where the bag costs 15,000 naira. So I can’t afford to buy enough.”