Families Split At US border Return To Guatemala Reunited 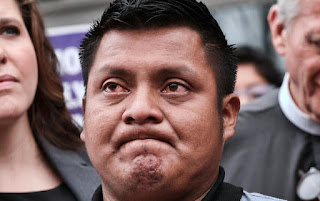 Hermelindo Che Coc, of Guatemala, holds back tears prior to a required check-in with immigration enforcement authorities in Los Angeles on Tuesday, July 10, 2018. Che Coc says his 6-year-old son feared he was dead after U.S. authorities separated the pair on the U.S.-Mexico border after they crossed into Texas in May. He says authorities told him he would be detained and his son was sent to a shelter in New York. 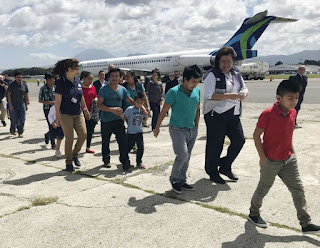 Families separated under President Donald Trump administration’s zero tolerance policy return home to Guatemala City, Guatemala, Tuesday, July 10, 2018, after being deported from the United States. After lining up on the tarmac, they headed to a processing center where they were screened and given identification before being released back into the country.


GUATEMALA CITY (ASSOCIATED PRESS) — Eleven families who had been detained and separated after they were caught crossing the U.S. border illegally returned home to Guatemala aboard a chartered flight. They lined up on the tarmac, shuffling — their shoelaces had been taken as a security precaution. U.S. immigration officials handed over paperwork to Guatemalan officials and shook hands. The group walked single-file into a squat grey building at the country's military base to be processed back into their country, along with dozens others also deported.

Chartered flights full of deportees from the United States regularly arrive to the Central American country. But the Tuesday flight was among the first containing families who had been separated at the border. More than 2,300 children were separated from their families at the height of the practice.
AP Immigrants Immigration Society