At Another Small Paper, Community Ties Are Personal 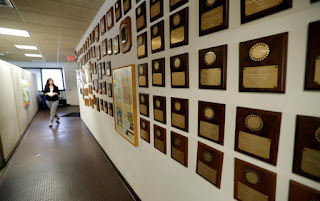 
HOUMA, LA. (AP) — The news of the bloody attack came from a newspaper more than 1,000 miles (1,600 kilometers) away, but not unlike their own, with deep ties to their town stretching back more than a century.

At The Courier in Houma, amid the bayous that marble south Louisiana, the staff was still digesting the outburst of violence that left five dead Thursday at the Capital Gazette and shattered the community of Annapolis, Maryland.

With a population of about 34,000, Houma is slightly smaller than Annapolis, which has roughly 39,000 residents. Like the Capital Gazette, The Courier is a community newspaper, focusing on people and events that make up the town — the newest contestant for school board, the summer basketball league, where people can see Fourth of July fireworks.

Readers reach out to executive editor Keith Magill through email or social media, but just as likely they'll see him on the street and ask why something did — or, more likely, did not — appear in the newspaper.

"You're not an anonymous face. You don't disappear into the ether. You're part of the community, and if that's not for you, then you don't want to be part of a small newspaper," said Magill, who has some three decades in the business, much of it at The Courier.

To newsroom secretary Edith Nevis, who has defused a lot of angry callers, the shooting in Annapolis is a reminder of the need to be wary, but she feels the very people they write about daily would come to their aid if anything were to happen.

"We live in a community that's very tight-knit," she said. "If something happens, I have no doubt our neighbors would come out to our defense." Houma is about an hour and half drive southwest of New Orleans in coastal Louisiana. Sugar cane is still grown here and the local tourism industry touts Cajun culture and seafood, but oil is what drives the economy — as evidenced by the sprawling shipyards and oilfield service companies that line the highway.

The connection between The Courier, which has been publishing for more than a century, and its readers is personal and often direct. The paper has been a constant presence in the life of Jason Bergeron, 43, a technology consultant, and his 66-year-old father, Gene. Both said Saturday that they grew up reading it.

"Every day, you know it's going to be there," Jason Bergeron said. Gene prefers the print edition. Jason usually reads it online now, although he still likes to read the Sunday print edition during weekend visits to his in-laws.

"I still touch something related to The Courier every day," said Bergeron, who is chairman of the local Chamber of Commerce. Courier reporter Natalie Schwartz pointed to the Capital Gazette staff's decision to still put out a newspaper after the heartbreaking mayhem as an inspiration.

"It reinforces the idea that community news matters and that no matter what happens over the course of the day, journalists are dedicated to putting out the truth," said Schwartz, who's in her third month as the crime and courts reporter.

With more than a dozen reporters serving The Courier and its sister paper, The Daily Comet in nearby Thibodaux, publisher Lee Bachlet sees the local coverage as vital to the community — and something nobody else provides in a city like Houma.

Jimmy Ellis agrees. An oncologist in New Orleans, he read The Courier and The Daily Comet for 16 years when he worked at Thibodaux Regional Medical Center. He said media from other markets, even relatively close New Orleans, wouldn't devote such detailed attention to the area's government, politics or sports and wouldn't be interested in features on honors handed to local high school bands.

"You had to be a really big deal for something in that part of the state to make it to the Times-Picayune," said Ellis, referring to a New Orleans newspaper. As for the Courier, he said: "They're still relevant."