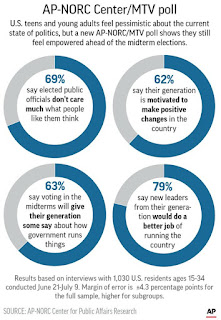 
WASHINGTON (AP) — Young people are looking for a change this election season — a generational change.

A poll by the Associated Press-NORC Center for Public Affairs Research and MTV found that most Americans ages 15 to 34 think voting in the midterm elections gives their generation some say about how the government is run, and 79 percent of this group say leaders from their generation would do a better job running the country.

The poll found young people eager to vote for someone who shared their political views on issues like health care and immigration policy. They expressed far less excitement about voting for a candidate described as a lifelong politician.

“These older Congress people, they don’t understand the internet and they don’t know what they’re talking about,” said Greg Davis, a 29-year-old from Grandview, Ohio, who says he watched in exasperation last spring as Facebook founder Mark Zuckerberg easily handled what was supposed to be a Senate grilling on privacy policy. “The questions that he was getting asked about security and privacy were asinine. We need leadership that actually understands tech.”

Political change is in the air in 2018. A record number of women are running. Young Americans who don’t remember a time without the internet are eligible to cast ballots. Some started paying attention in 2016, after Donald Trump upset Democrat Hillary Clinton and political tensions in the U.S. escalated.

About two-thirds of the young people in the poll say they are extremely or very excited to vote for a candidate who cares about the issues that affect them and their generation, including the economy, gun policy and equal rights, along with immigration and health care. Although most say they’d be at least moderately excited to vote for younger, nonwhite and female candidates, those characteristics don’t generate as much excitement as someone who shares their political views. By contrast, fewer than half are at least moderately excited about a candidate who is a lifelong politician.

That could matter in the 2018 midterm elections if young people turn out to vote, a result that campaigns and political action committees are spending big money to produce. One measure of whether they are succeeding is engagement. About half of young adults report following news about the midterms often or sometimes. About another quarter say they engage on social media. About a third say they’re certain to vote, with some others indicating they are more likely to vote than not.

If more young people turn out at the polls, it’s Democrats who are poised to benefit. Not only are young adults more likely to be Democrats, but young Democrats are also more likely than young Republicans to say they’re certain to vote, 40 percent to 27 percent. Roughly two-thirds of Democrats are engaging with news about the elections often or sometimes, and more Democrats than Republicans say they’re interested in the midterm elections. For many Democrats, this interest is derived from the 2016 presidential election: 54 percent say the outcome increased their interest in the 2018 midterm elections.

“I haven’t voted so much in the past, but I’m paying attention this year,” said Tyler Seulean, 26, a truck driver from Houston, Texas, who says he leans to the political left. He said he did not vote in the 2016 election but is following immigration and other issues related to Trump’s administration. “I’m older,” he adds. “It’s more important to me now.”

Another factor in whether this group will be motivated to vote is that they feel pessimistic about the political environment. Nearly 7 in 10 young adults think American politics have not been functioning well in the past month, and many think the country will become even more politically divided in the next few years.

Still, an overwhelming number share hope that the election will bring about change — and many think their generation will be the impetus.

On policy issues, young Americans connect what’s happening in the world with policies that are important to them. Immigration is the leading issue on the minds of young Americans, many of whom took the survey when migrant children were being separated from their families at the U.S.-Mexico border. Earlier this year, just after the shooting at a Florida high school that left 17 students and staff dead, the first Youth Political Pulse poll found about 2 in 10 young adults reported gun policy as the most concerning issue facing the nation, and that was more mentioned than any other issue.

The AP-NORC and MTV poll of 1,030 young Americans age 15-34 was conducted June 21 to July 9, 2018. The poll was conducted using NORC’s probability-based AmeriSpeak panel, which is designed to be representative of the U.S. population. The margin of sampling error for all respondents is plus or minus 4.3 percentage points.