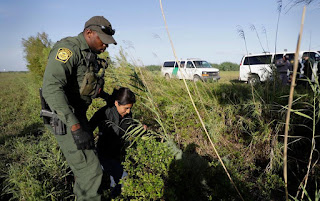 A U.S. Customs and Border Patrol agent escorts an immigrant suspected of crossing into the United States illegally along the Rio Grande near Granjeno, Texas. A U.S. official tells The Associated Press that Border Patrol arrests fell sharply in June 2018 to the lowest level since February, ending a streak of four straight monthly increases. The drop may reflect seasonal trends or it could signal that President Donald Trump's "zero-tolerance" policy to criminally prosecute every adult who enters the country illegally is having a deterrent effect. The official spoke on condition of anonymity because the numbers are not yet intended for public release.

MCALLEN, TEXAS (AP) — Border Patrol arrests fell sharply in June to the lowest level since February, according to a U.S. official, ending a streak of four straight monthly increases. The drop may reflect seasonal trends or it could signal that President Donald Trump's "zero-tolerance" policy to criminally prosecute every adult who enters the country illegally is having a deterrent effect.

The agency made 34,057 arrests on the border with Mexico during June, down 16 percent from 40,344 in May, according to the official, who spoke on condition of anonymity because the numbers are not yet intended for public release. The June tally is preliminary and subject to change.

Arrests were still more than double from 16,077 in June 2017, but the sharp decline from spring could undercut the Trump administration's narrative of a border in crisis. Customs and Border Protection, which includes the Border Patrol, declined to comment on the numbers, saying it doesn't discuss them as a matter of policy until public release "to ensure consistency and accuracy."

The administration announced in early May that it was prosecuting every illegal entry, including adults who came with their children. The separation of more than 2,000 children from their parent sparked an international outcry and Trump reversed course on June 20, ordering that families should stay together.

Customs and Border Protection Commissioner Kevin McAleenan told agents to temporarily stop referring illegal entry arrests to the Justice Department for prosecution if they involve parents unless they had a criminal history or the child's welfare was in question. His edict came "within hours" of Trump's directive to avoid splitting families.

McAleenan told reporters last week that border arrests were trending lower in June but said he wouldn't provide numbers until their public release in early July. "I believe the focus on border enforcement has had an impact on the crossings," McAleenan said.

Rising temperatures could also be a major influence, discouraging people from walking in the scorching and potentially lethal heat in much of California, Arizona, New Mexico and Texas. Arrests fell from May to June in four of the previous five years, last year being the exception.

Still, the month-to-month percentage decline is notable. It fell in the low single digits in 2014 amid a major surge in illegal crossings and in 2015. Declines approached 20 percent in 2016 and 2013. Border arrests - an imperfect gauge of illegal crossings - surged during much of last year after falling dramatically in the early months of the Trump administration.

The numbers do not reflect activity at official crossings. The Border Patrol polices between ports of entry, not at them.
AP News News Desk Society