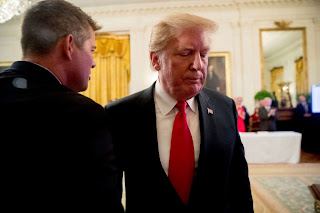 President Donald Trump shakes hands with Rep. Sean Duffy, R-Wis., as he departs after signing an Executive Order that establishes a National Council for the American Worker at the White House July 19, 2018. Image: Andrew Harnik

We've known for a while that Michael Cohen taped some of his conversations and that investigators had those tapes. What we didn't know was whether a tape of President Trump was included or whether the two discussed legally problematic things.

We now know the answers to those questions: Trump was, and they did.

The Washington Post has confirmed that potential turning point. Investigators have a tape of Cohen discussing a potential payment to Playboy Playmate Karen McDougal, who alleged an affair with Trump, about two months before the 2016 election. The New York Times first reported the story. Trump's lawyer, Rudolph W. Giuliani, confirmed the tape exists but said it's actually “exculpatory,” because Trump suggests the payment should be documented, and the payment wasn't actually made.

Let's assume for a moment that that's true, and nothing on the tape is, in and of itself, damning. It still raises some very important questions — the most important of which is: Why were they even talking about such things?

The other key question is how this plays into the payment McDougal did get from the Enquirer's publisher, American Media Inc. Given the Enquirer is run by Trump ally David Pecker, it has long been alleged and suspected that Pecker was doing Trump a favor by buying McDougal's story and then not running it — a practice known as “catch and kill.” The practical effect was basically the same as Cohen paying Daniels: The woman alleging the affair was not allowed to go public with her claim. We know, based on The Washington Post's reporting last month, that Cohen was given a heads-up about stories the Enquirer was going to run on Trump. It suggested a very cozy relationship.

There is plenty we still need to learn here, not least of which is what Trump actually said on the tape. But we at least know now that the firewall between Trump and Cohen on these matters wasn't as impenetrable as we've been led to believe. If they talked about this, there's no telling what else they talked about and what else Cohen, who appears increasingly anxious to cooperate with authorities, might be able to spill — that isn't already on tape.
News Desk Society Washington Post