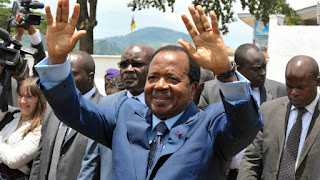 Cameroon's President Paul Biya plans to stand for election on October 7 amid spiraling violence and alleged human rights abuses in the country. Image via CNN


LAGOS, NIGERIA (CNN)--Cameroon's 85-year-old president has announced plans to stand for re-election in the country's elections on October 7, amid spiraling violence and alleged human rights abuses in the country.

Paul Biya, who has led the country since 1982, posted on his Twitter account Friday that he plans to stand for re-election.

However, the octogenarian leader, one of Africa's longest-serving rulers, is accused by rights groups of presiding over a brutal regime, characterized by human rights abuses, particularly towards residents of Cameroon's English speaking provinces.

Horrific videos and images of abuse, murder, and torture allegedly by Cameroonian soldiers have flooded social media in recent months.


CNN has not been able to independently verify these images.

However, one of these shocking videos, which has gone viral online, shows the execution of two women and two children by uniformed men and has attracted widespread condemnation.
Rights group Amnesty International says it has "credible information" that Cameroonian soldiers were involved.

The agency said: "Extensive analysis of the weapons, dialogue, and uniforms that feature in the video, paired with digital verification techniques and testimonies taken from the ground, all strongly suggest that the perpetrators of the executions are Cameroonian soldiers."

Cameroon's Ministry of Communication said in a statement that the government is investigating the claims, although government spokesman Issa Tchiroma Bakary is quoted in local media initially saying the video could be "fake news."

''We haven't authenticated yet, but I draw your attention to what we call fake news. Do not be peremptory in the attribution of this video to the Cameroonian army.

"Because the enemy is always able to slip into our defence and security forces to attribute to us such heinous crimes,'' Bakary said in local mediareports.

There are several edited versions of the video. One of them, which CNN has seen, is just over two minutes long and does not show the women and children being executed.

A group of men, some of them wearing army uniforms and carrying guns, are seen abusing the women and another man, who is filming, is providing commentary about them.

One of the men slaps a woman who is walking with a young girl next to her and is heard saying in French, 'BH. you are going to die."

Behind her is another woman with a baby on her back. The women are led to a side road near a dirt track, all are blindfolded, apart from the baby, and shot, according to Amnesty researchers.

BH is thought to refer to the Islamist terrorist group Boko Haram, which has waged a brutal decade-long insurgency in northeast Nigeria.

This latest incident follows an Amnesty International report in June stating that English speakers in the country were being targeted by both the Cameroonian military and armed Anglophone separatists in waves of violence that Amnesty described as "unlawful, excessive and unnecessary."

Speaking on the condition of anonymity for fear of reprisals, one man living in Cameroon told CNN: "It is a very sad time for us... An issue, which started with people holding peace branches, has now spiraled into outright war...with gun battles becoming part of everyday life for many in these regions.
"It is terrible, and I cannot assure you that the way things are going, we are not in for a resolution any time soon," he added.

The US Africa Command, which oversees US troops on the continent including the hundreds of American advisers working with Cameroonian soldiers, said it was aware of the execution video.
However, spokesman Major Karl Wiest said: "At this time, we cannot confirm the authenticity, nor can we confirm any possible military affiliation of those shown in this troubling video."