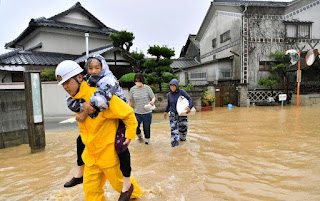 Television footage showed a residential area in Okayama prefecture seeped in brown water spreading like a huge lake. Some people fled to rooftops and balconies and waved furiously at hovering rescue helicopters.

Okayama prefecture said a man caught in a landslide died, and six others were missing. Evacuation orders had been issued to more than 360,000 people, the prefecture said in a statement. Throughout the affected areas, parked cars sat in pools of water. NHK TV said water had reached as high as 5 meters (16 feet) in the worst-hit areas.

Kyodo news service, which put the death tally at 34 people, said one death was in a landslide in Hiroshima, which had set off a fire, while the body of a child was found in another area. NHK said a woman died in her home in Hiroshima when it got buried in a mudslide.

Assessing overall casualties was a challenge because of the widespread damage. NHK repeatedly urged those awaiting rescue to not lose hope. In Ehime prefecture, a woman was found dead on the second floor of a home hit by a landslide, Kyodo said. Also in Ehime, two elementary-school girls and their mother who got sucked into a mudslide were rescued but their hearts weren't beating, it said.

Kyoto prefecture said it was working to control flooding at several dams and identified one fatality as a 52-year-old woman. Military water trucks were rushing to areas where water systems were no longer working, Okayama prefecture said. Troops in camouflage outfits helped people and pets reach dry land on small military boats.

Evacuation orders or advisories were sent for 4.72 million people, and 48,000 members of the Self-Defense Forces, police and firefighters were mobilized for search missions, according to Kyodo.

Her work can be found at https://www.apnews.com/search/yuri%20kageyama
AP Japan News Desk