US Warns Zimbabwe Over Election After 2-year-Old Killed 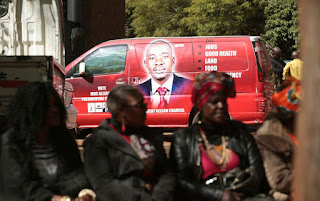 HARARE, ZIMBABWE (AP) — The United States on Thursday condemned the killing of a 2-year-old boy in Zimbabwe as a "senseless and horrific act" and warned that if the murder was politically motivated it would call into question the country's commitment to a free and fair election next month.

President Emmerson Mnangagwa, the 75-year-old former Mugabe ally who took power with the military's help in November, faces a strong challenge from Nelson Chamisa, a 40-year-old who has energized the main opposition party.

Mnangagwa has pledged free and fair elections and invited Western observers for the first time in nearly two decades. Past elections in the southern African nation were marked by allegations of fraud and violence.

The U.S. statement warned against "a continuation of violence during this campaign season." The U.S. and others have indicated that a free and fair election is a key step toward lifting international sanctions on Zimbabwe.

Mnangagwa has condemned the killing of 2-year-old Professor Lumbe over the weekend, asked police to investigate and called on the public to "be peaceful at all times" as the election approaches, the state-run Zimbabwe Herald reported.

A police spokeswoman confirmed that the boy's father was a local candidate with the National People's Party, one of several opposition parties in Zimbabwe, the Herald reported. The opposition in recent weeks has raised concerns about alleged military involvement in the electoral process and demanded transparency in the voters' roll and in the printing of ballots.

The presidential race is set to be a crowded field after 23 candidates officially registered in the country with 5.5 million voters.