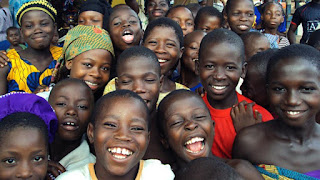 Image via The Guardian

LAGOS (THE GUARDIAN)--Irked by the huge number of out-of-school children in Nigeria, the United Kingdom (UK) has called for a renewed investment by public/private sector to address the situation.

The country said it was disturbing that about 12 million Nigerian children are currently out of school, which represents the highest anywhere in the world.UK’s High Commissioner to Nigeria, Mr. Paul Arkwright raised the concern in Lagos, while addressing members of the Royal Institute of Chartered Surveyors (Nigeria Group). He urged the professionals to support the federal and state governments, by committing huge funds to children education, particularly the girl-child to give them a brighter future.

Speaking on business and integrity, he restated that the UK is committed to commercial and economic relationship with Nigeria, as trade between the two countries is significant and hopes to increase the trade volume to over 8billion pounds by the year 2020. He said the target is ambitious and by working together with Nigerian government, the figure would be improved.

He said: “It is very important for the UK to strengthen its international ties in business with Nigeria, which has about one million of her citizen in the United Kingdom. Our commitments to support Nigeria to tackle the all-too-familiar security threats it faces is one of the things I care about, as High Commissioner.

“The economic and commercial relationship with Nigeria is already an important part of the deep friendship between the two countries. We are not insignificant trading partners-two way trade in 2016 was over 3.4billion pounds and that figure is predicted to have risen. UK companies remain major investors in Nigeria. Some of the investors include; British Airways, Shell and PJ Cussons.”
News Desk Society The Guardian