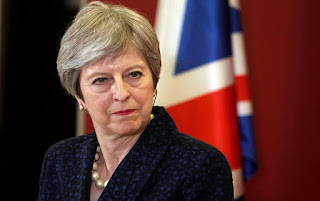 British Prime Minister Theresa May looks on during a news conference with her Macedonian counterpart Zoran Zaev, not pictured, following their meeting at the government building in Skopje, Macedonia. British Prime Minister Theresa May is urging feuding Conservative lawmakers to unite and prevent the government from being defeated in key votes on its main Brexit bill. The European Union Withdrawal Bill, intended to enact Britain's exit from the bloc, has had a rocky ride through Parliament. The House of Lords has inserted 15 amendments to soften the terms of Britain's departure.


LONDON (AP) — Britain said Thursday it will lift a cap on the number of visas granted to foreign doctors and nurses to help ease staffing shortfalls in the country's National Health Service. Prime Minister Theresa May's spokesman said the government would remove non-European Union doctors and nurses from a cap on the number of skilled-worker visas that can be issued each year.

The cap currently restricts Tier Two visas for non-EU workers to 20,700 people per year. The move is expected to be formally announced by the Home Office on Friday. The Royal College of General Practitioners said it would be a "much-needed victory for common sense and patient care."

It's the first easing of immigration rules by a Conservative government with a longstanding — and unmet — goal of cutting net immigration to below 100,000. It's currently more than double that. Critics say the target is arbitrary, unrealistic and economically harmful.

People from all 28 EU countries can currently live in Britain under the bloc's free-movement rules. They will lose that automatic right when the U.K. leaves the EU next March. Britain's 2016 vote to leave the bloc was followed by an increase in the number of EU medical staff leaving Britain, adding to pressures on the country's overstretched state-funded health care service.