The Latest: Trump Asserts 'Absolute Right To PARDON' Himself 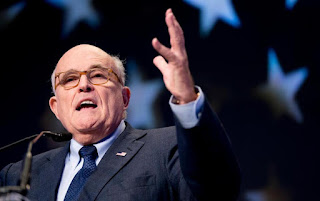 Rudy Giuliani, an attorney for President Donald Trump, speaks at the Iran Freedom Convention for Human Rights and democracy in Washington. Sharpening their legal and political defenses against the special counsel’s Russia probe, President Donald Trump’s attorneys stressed Sunday, June 3, that they would contest any effort to force the president to testify in front of a grand jury but downplayed the idea that Trump could pardon himself.

In a tweet Monday, Trump weighed in on the question of whether he could pardon himself should the special counsel find he interfered in the investigation into Russia meddling in the 2016 election. Trump's lawyer, Rudy Giuliani, in television interviews Sunday, suggested Trump might have that authority to pardon himself but would be unwise to use it.

Giuliani told NBC's "Meet the Press": "Pardoning himself would be unthinkable and probably lead to immediate impeachment." Trump, in his tweet, declared: "As has been stated by numerous legal scholars, I have the absolute right to PARDON myself, but why would I do that when I have done nothing wrong?"

12: 45 a.m. Can a president pardon himself? An attorney for President Donald Trump is playing down the possibility that Trump would try to — if it came to that. Rudy Giuliani says Trump might have that authority but exercising it would be "unthinkable." Besides, Giuliani, adds, Trump has done nothing wrong and has no need to consider pardoning himself.

Giuliani's comments come as the White House sharpens its legal and political defenses against the special counsel Russia probe. He made it clear Trump's legal team would combat any effort to force the president to testify in front of a grand jury.
AP News Donald Trump News Desk