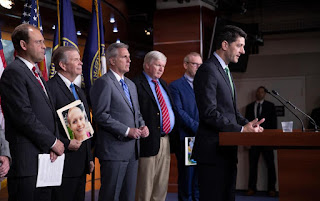 Speaker of the House Paul Ryan, R-Wis., backed up by fellow Republicans, talks about battling the crisis of opioid addiction, on Capitol Hill in Washington, Wednesday, June 13, 2018. The House is diving into a two-week vote-a-thon on dozens of bills aimed at opioid abuse, as lawmakers seek to bolster efforts to curb a crisis that's killing tens of thousands a year and to score a popular win they can tout for the midterm elections.

WASHINGTON (AP) — The Latest on Congress and immigration legislation (all times local): 11:08 a.m. House Speaker Paul Ryan says he's not comfortable with a Trump administration policy that separates children from their parents as they are being detained after crossing the southern border illegally.

Ryan says, "We don't want kids to be separated from their parents," but adds that the policy is being dictated by a recent court ruling. He says legislation is needed to fix the problem. House Republicans are considering next steps on two immigration bills. Ryan and other GOP leaders persuaded moderate Republicans to drop a renegade effort to force votes on legislation that would have protected young "Dreamer" immigrants with a path to citizenship.

Votes on immigration bills could be held as soon as next week, although Ryan said Thursday he "won't guarantee passage" of any measure. __ 1 a.m. Republicans are considering a new merit-based visa category that would assign points to applicants based on various factors, such as education or military service. It would be available to the young "Dreamer" immigrants as well as other immigrants.

The Dreamers number up to 1.8 million young people living in the U.S. illegally since childhood. Some 700,000 participate in the Obama-era Deferred Action for Childhood Arrivals program, or DACA. Those who don't participate in the program never signed up for DACA or didn't qualify at the time because of their age or other factors, including when they arrived in the U.S.

The measure is a work in progress, though leaders hope to unveil it soon. So far, it's hewing close enough to President Donald Trump's immigration agenda that Speaker Paul Ryan, R-Wis., says the president is supportive of the approach.

A range of other ideas remain in flux including provisions that would make it easier to deport immigrants who commit crimes and to end to the practice of releasing those immigrants who are here illegally but commit smaller or misdemeanor offenses.
Capitol Hill Democracy Immigrants Immigration Society